Signs of Stress in Freshwater Shrimp 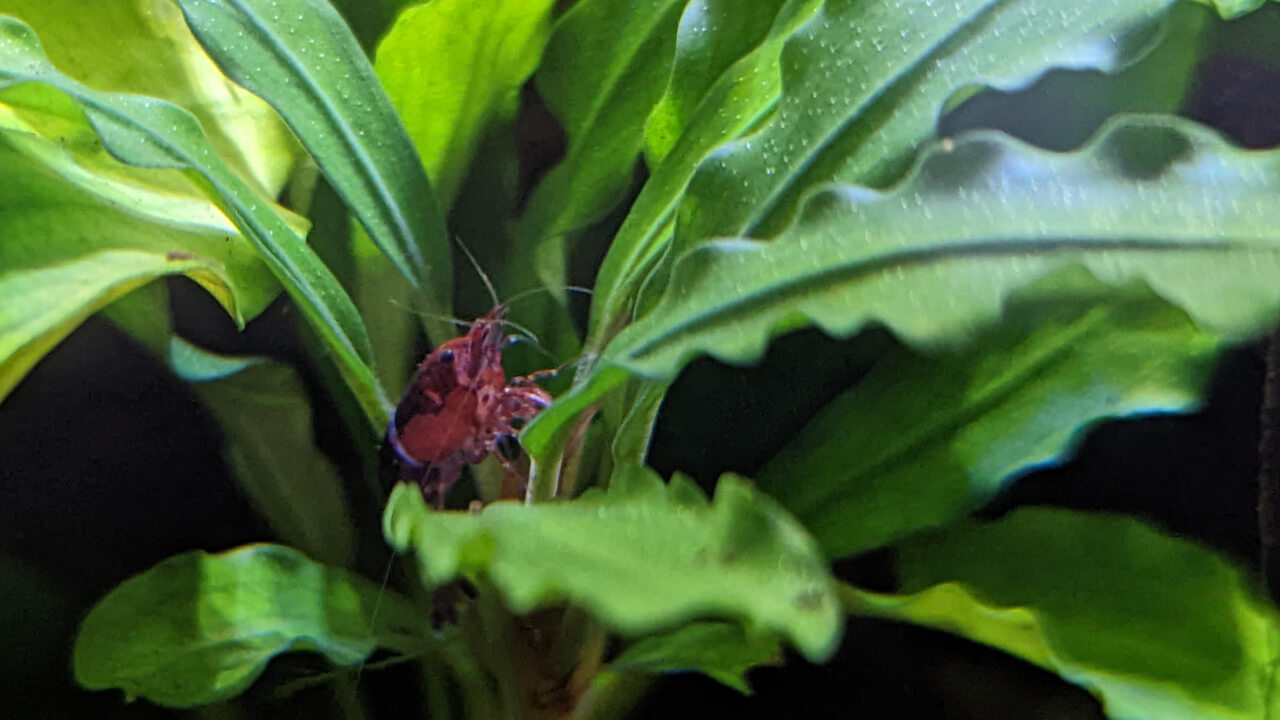 How do you tell if a shrimp is happy?

Shrimp are simple creatures. All they need to be happy is plenty of food and some space to chill.

Dwarf shrimp spend pretty much all of their time picking up tiny pieces of biofilm and algae.

You'll see their arms moving constantly as they scoop food into their mouth.

To find the best spots for biofilm, they'll scout around the tank. Most of the time they'll just climb over rocks and walk over the substrate.

Eventually, they'll take a leisurely swim somewhere else to chill out.

Shrimp are excellent at hide and seek too. They love disappearing behind some driftwood and getting you worried when you don't see them for a while.

Hiding is totally normal, and nothing to worry about.

What are some signs that your shrimp might be a bit stressed?

1. Swimming around a lot

Shrimp swimming around constantly can be a useful indicator that your water parameters aren't right.

However, it's not always a bad sign. Males swimming around the tank is a completely normal part of the breeding process.

A female molts and releases pheromones into the water. This gets all the males’ attention, and they start rushing around the tank to find her.

Things to check for swimming shrimp

Sometimes your shrimp will just freeze for a while, like taking a quick nap while standing up.

This is totally normal, and they're usually still for a few minutes every so often. It can be a more telling sign when you notice a lot of shrimp doing it at the same time.

They should be foraging for food around the tank, continuously shovelling food into their face.

If you notice only one shrimp staying still for hours, it could be that they're actually stuck in their molt.

Things to check for lethargic shrimp

As shrimp spend pretty much all their time eating, this can be quite concerning.

If you've added extra shrimp food to your tank, and they don't seem interested, don't panic. It's quite likely they're just enjoying all the biofilm and algae that's grown around the tank.

They come and investigate the new food another time.

The shrimp's body can struggle to function properly if the water parameters aren't right. For example, if your pH level is way higher than it should be.

Another reason a shrimp won't eat could be because a fungus prevents them.

Vorticella is usually a white, fluffy fungus that appears around a shrimp's nose and face. Bad cases could prevent them from eating properly.

It's fairly normal for some cherry shrimp to start growing what's known as a racing stripe as they age.

A racing stripe is simply a line of lighter coloured shell down the middle of their back, and over the top of their head. This is totally safe and nothing to worry about.

However, if you notice your shrimp turning a white colour, it could be muscular necrosis, which is unfortunately fatal.

If you notice any shrimp that have died from muscular necrosis, you should remove their bodies from the tank.

Amano shrimp can turn a blue colour when they're stressed. If your Amanos used to be clear or brown, and are now blue, check their water parameters.

Things to check for colour changes

Not all shrimp grow to be the same size in adulthood. There's some genetic lottery at play, just like with us.

But, if you notice newer generations of shrimp never quite reaching the same size as your original shrimp, there may be a problem.

The most likely culprit is there's not enough food for them to grow healthily. See if you can increase the amount of biofilm, or start adding shrimp food to the tank.

Another possible reason could be the wrong general hardness level. This could prevent your shrimp building their shell to the right size and strength.

6. Staying at the water surface

Are all your shrimp hanging around the water surface, or trying to climb out? It's quite likely you've got a low oxygen level in the water.

If you've only got one shrimp doing it, it could just be that they're just trying to get at some new tasty algae, that's normally out of reach.

When you notice lots of shrimp doing it, that's a problem.

Things to check for shrimp at the water surface

Dwarf shrimp molt about once a month. They break out of their old exoskeleton to build a new one that's a slightly better fit.

If their shell is too soft, when they try to break out, it just bends, and they get stuck. If it's too hard, they will also struggle to break out and be trapped.

This is why it's so important to monitor your general hardness (GH) level.

Other possible reasons for failed molts are poor diet, or other unwanted elements in the water.

Measure your TDS to check it's a reasonable number, and check if you're feeding them properly.

How do you spot a shrimp stuck in their molt?

Things to check for failed molts

Have you had your shrimp for months, and not seen any berried females? They're very good at hiding, so surprise babies can be pretty common.

It's completely normal for shrimps in new tanks to take a few weeks or months before they start breeding. They want to get comfortable with their new surroundings first.

Are you sure they're not breeding? It could be that the babies are hatching but just struggling to survive for some reason.

A lack of biofilm in the tank is one of the main reasons baby shrimp might struggle.

You should measure these parameters fairly often to prevent health problems for your shrimp:

As long as your tank's cycled properly, most water parameter issues should be fixable with simple water changes.

Give your shrimp room to hide

Hiding spots are a great way to make your shrimp feel safe and reduce any stress.

Planted tanks with lots of hardscape caves and shelter will give you the best results with breeding and baby shrimp survival.