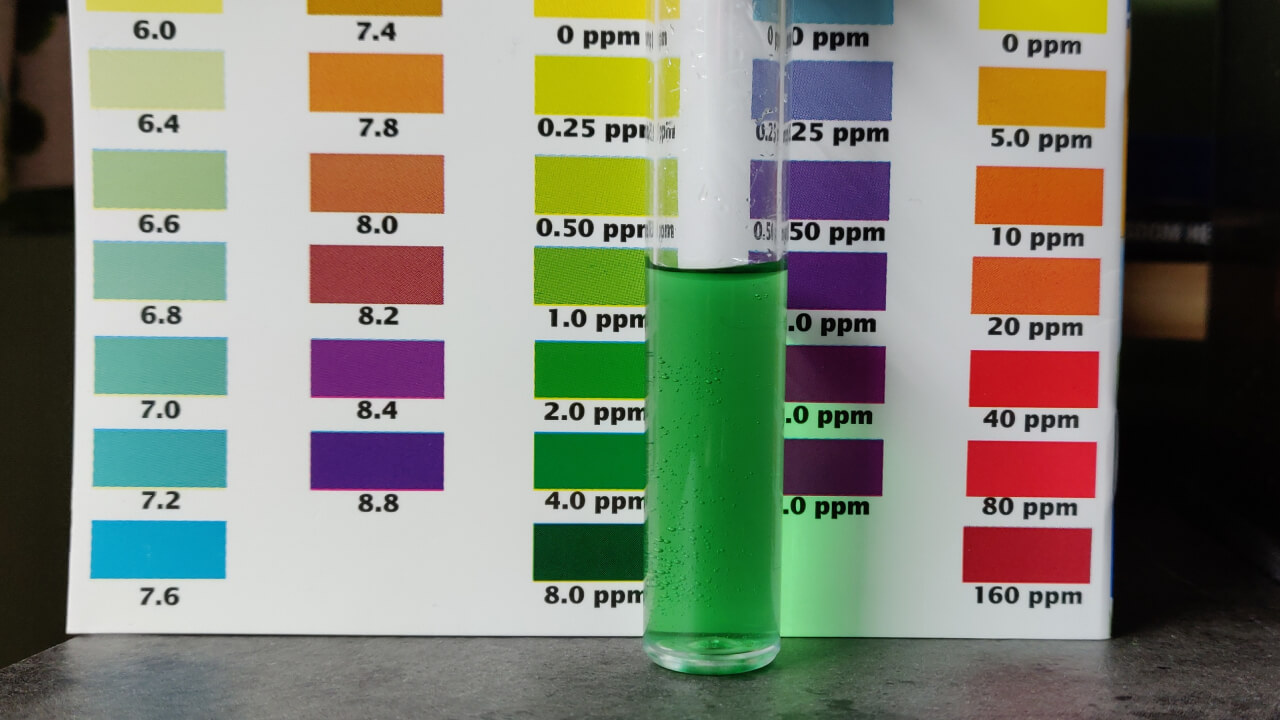 Ammonia is a toxic chemical that naturally appears in your shrimp tank.

It's produced by your shrimp as waste, but it can also come from leftover food rotting.

You need beneficial bacteria, by cycling your tank, to keep the ammonia close to zero. Consistent water changes also help to keep it under control.

How bad is ammonia for shrimp?

Any measurable amount of ammonia in the water will stress your shrimp, and cause chemical burns to their body.

It's quite a common cause of death in new shrimp tanks.

This is why it's so important to cycle your tank fully before adding any shrimp.

You should always aim for 0 ppm of ammonia in the water. Even a reading as low as 0.25 ppm can cause issues.

There are actually two different types of ammonia:

Ammonia (NH3) is the toxic form, and ammonium (NH4) is surprisingly harmless.

Freshwater test kits measure these two types together. You'll get a reading for the total amount of ammonia.

There aren't any quick or easy tests for the two types. This is why you'll want to get your total ammonia reading to zero.

Zero ppm ammonia is the only safe level.

Ammonia is less toxic at a lower pH

The ratio of toxic ammonia to safer ammonium rises with the pH level.

This is another reason to try and keep your pH around 6 for Bee shrimp. It gives you a bit more time to detect the rise in ammonia.

This isn't bad. It's actually helpful to start the tank cycling process. Obviously it will make the water toxic for shrimp for a while, though.

After a few weeks your filter should've built up a healthy colony of beneficial bacteria.

You should only add your shrimp to the tank after the bacteria's converted the ammonia into nitrates.

Signs of stress from ammonia

What should you look out for?

Some symptoms of stress caused by ammonia in your shrimp tank are:

If you spot any of these signs, test your water for ammonia.

How is ammonia removed?

The nitrogen cycle is what removes ammonia from the water, and converts it into other safer elements.

Cycling a tank is another way of saying “starting the nitrogen cycle”.

Nitrites shouldn't be confused with nitrates.

Nitrite is the midway point of ammonia being converted into nitrate.

It is less harmful than ammonia, but it's still very toxic and dangerous for shrimp. You want 0 ppm of nitrites in your tank.

If you have a nitrite level above zero, it's likely your tank isn't cycled fully.

How to prevent ammonia spikes

Most of the time, your beneficial bacteria will be able to process the ammonia before it's dangerous.

There are some occasions where you'll get a sudden jump in ammonia, and the bacteria just can't keep up.

This is more likely to happen with shrimp tanks as they have such a low bioload. They produce very little waste, and so only a small amount of beneficial bacteria builds up.

These tips will help to stop any jumps in ammonia:

Make sure you've given your tank plenty of time to cycle before adding your shrimp. You'll have a much easier time keeping the ecosystem balanced and healthy.

Provide lots of surface area for the beneficial bacteria to grow on. Sponge filters, substrate, drift wood, and plants are all great for this.

You can also buy “bacteria in a bottle” if you want to give your tank a bit of a boost.

Whether or not the food gets eaten, it still gets broken down into the water.

Overfeeding your tank is a fairly common way to get high ammonia levels. You should only feed enough for your shrimp to eat within a few hours.

This is especially true for soft foods like vegetables, as they break down and rot quicker.

Using a feeding dish makes it easy to remove any leftovers.

Look out for dead shrimp and snails

Normally, when a shrimp dies, it gets eaten by the other shrimp and snails fairly quickly.

This is a good thing, most of the time anyway. Their “cleaning up” stops the body decaying in the water and releasing ammonia.

In a scenario where you've had a lot of deaths, they may not be able to clean up quick enough. Nano tanks are more vulnerable, as they've got fewer shrimp to help tidy up and less water to dilute any ammonia.

As a general rule, don't panic if you see a single dead shrimp. It's probably fine to leave on the tank.

When you have lots of dead shrimp, you should try to remove them all to prevent a massive ammonia spike.

Snails can be a big source of ammonia when they die. Their soft bodies decay faster compared to shrimp.

Combined with the fact they're trapped inside a hard shell, it can be difficult for shrimp to get to it all.

Remove any large dead snails you find in the tank.

Plants will absorb ammonia and nitrates from the water to grow.

They will only take in relatively small amounts, but over time and multiplied with lots of plants, it can make a big difference.

This is the idea behind how a Walstad tank works. They rely on having a tank filled with plants, instead of using a filter.

The normal bottleneck for underwater plant growth is lack of carbon dioxide. They can only get access to whatever amounts dissolved into the water.

Floating plants don't have this problem. As they can get the carbon dioxide directly from the air, they can absorb even more nitrates and grow faster.

If you've got a Hang on Back filter, or relatively high hardscape, you could try growing some emersed plants.

How to get rid of ammonia

Sometimes you'll get a wave of ammonia, even if you've done everything you can to prevent them.

In these situations, there are a few ways to quickly get the ammonia under control again.

Seachem Prime is one of the most popular detoxifiers/water conditioners.

It contains a binder, which makes any ammonia, nitrite, and nitrate in the water non-toxic. This gives the beneficial bacteria in your filter more time to process it.

This happens pretty much instantly, making your water safe for shrimp again within minutes.

You should only treat this as a temporary solution, and try to fix the cause of the ammonia ASAP.

It's super helpful to have some handy for emergencies, though.

If the ammonia level isn't awfully high, you might be able to dilute it enough with a simple water change.

Most of the time you'll want to use both a detoxifier and do a water change soon after.

As well as using a detoxifier or doing a water change, adding floating plants can help too.

They can quickly pull ammonia and nitrates from the water. They've got easy access to the carbon dioxide in the air, so they can use up these nutrients faster than underwater plants.

Floating plants might not be enough on their own, but will speed up the ammonia removal a bit.

Any ammonia over 0ppm is bad and will stress or harm your shrimp.

A heavily planted tank is a great way to naturally control the ammonia level.

Get a water detoxifier, like Seachem Prime, so you're ready to handle unexpected ammonia spikes.