Cherry and bee shrimp are omnivores, meaning they eat both meat and vegetation, and this allows them to enjoy a lot of different types of food in their diet. Just like us, they'll benefit greatly from having a varied diet to ensure they get all of the nutrients and minerals they need to thrive so it's recommended to alternate the food you give them.

If you only provide a single type of meal that isn't designed specifically to contain all of the supplements the shrimp need, then you could encounter molting problems. Some examples being protein and calcium, which are very important nutrients for shell growth after molting.

You might not see much interest in new food if they're not used to it yet, make sure to give the new food a chance to grow on them. You might also notice this if the shrimp simply aren't that hungry as there could already be plenty of food available in their tank.

A reasonable guideline is to feed only as much as they can completely eat within two or three hours.

This can obviously vary quite a lot depending on what you're feeding them but over time you'll learn how much to add. Start with adding a very small portion and then monitoring how quickly it gets scoffed, if it's gone before an hour you can add more next time.

Most shrimp keepers will feed their colonies somewhere between every day and every two or three days, depending on the tank's age and conditions etc.

Well-aged tanks that have been up and running for months will normally have a decent amount of biofilm and algae, giving them plenty to graze on throughout the day. If you have a tank like this then you can reduce your feeding schedule to the every few days kind of scale, unless you're trying to get a big population boom - in which case the extra tasty food will be greatly appreciated.

One grim and morbid aspect of shrimp life is that large colonies are content with eating their deceased. This sounds a bit grizzly but why should they let those nutrients go to waste? You might never even notice this happening, a good sized group can eat a single dead shrimp in hours. It's still wise to remove dead shrimp if you're still dealing with only a small number of them because if not eaten quickly enough, it could become a source of ammonia.

Should you remove uneaten food?

It depends on the type of food, but as a rule of thumb, it's a good idea to remove any food which hasn't been eaten within a couple of hours, just to be safe. Having said that, some foods like snowflake can be left in the tank until it disappears because it won't pollute the water.

Adding snails to your tank will help to prevent you overfeeding the tank as they'd love to come and eat the extra leftovers before they have a chance to rot and pollute your water. You shouldn't add more food if you can still see leftovers from their last meal, but if left for too long it could breakdown and become a source of ammonia and potentially stress or harm your shrimp. Having a clean up crew ready to deal with this is helpful, but if you keep overfeeding you could end up with a snail population explosion, try to keep a balance you're happy with.

When you're planning to go on holiday or leave your tank unattended for anything up to a couple of weeks, you don't necessarily need to hire a shrimp-sitter. With careful preparation you should be able to leave your tank alone for up to two weeks. If you're leaving for more than two weeks, I'd recommend getting someone to help with feeding and maybe water changes, depending on the duration of your break.

Rather than risking automatic feeders malfunctioning or adding too much food the day you leave, it's recommended to add one or two pellets of snowflake food. The main reason for this is that it won't break down and pollute your water whilst you're gone and will allow your shrimp to continuously graze on it for days. Combined with a well-aged tank, there should be plenty of biofilm to be eaten until you return.

Perform your normal water change amount the day before you leave so that you don't need to worry about nitrate buildup.

It's important that you don't do anything different just before you leave, like performing a larger than normal water change, because you won't be around to monitor your tank and spot any behavioural changes.

Biofilm is what makes up the vast majority of their natural diet, especially in the wild. Biofilm is an almost invisible layer of bacteria/microorganisms that grows everywhere, including all of your glass walls, rocks, plants, substrate, filter sponge, etc. This food source is why it's recommended to let a new tank continue to age after the cycle has finished, it's great to have a large backlog of biofilm ready to go.

A common way to encourage biofilm growth is by placing leaf litter, specifically indian almond leaves, in your tank. Leaf litter has other benefits too, besides being an amazing food source.

Indian almond leaves in particular will release tannins into your water which will slightly tint your water to a darker tea colour over time unless you boil and soak them enough before putting them into your tank. These tannins will slightly reduce your water's PH too, and they also have some antibacterial properties. Baby shrimp will appreciate the extra hiding places under the bigger leaves where they can eat safely.

The leaves will break down gradually over the next few weeks in your tank and the bacteria and rotting bits of leaf will be enjoyed by your hungry shrimp.

Other parts of plants commonly used in shrimp tanks are alder cones and cinnamon sticks, both of which will also add tannins to your water with the previously mentioned benefits.

If the idea of dealing with tannins doesn't appeal to you, a biofilm promoting powder might be the next best option.

Products like Shrimp King BioTase Active and Bacter AE can do a respectable job of getting biofilm to grow in your tank. It's definitely a welcome addition to new tanks as it might otherwise take a long time to build up a good supply.

These powders are brilliant for baby shrimp too as the powder dissolves into the water and gets spread around. As the babies usually hang around in a single spot for their first few weeks, getting biofilm everywhere ensures they've got easy access to plenty of food.

Snowflake food gets its name from what it looks like; fresh snow lying at the bottom of your tank. It's made from the husks of soybeans getting squeezed and dried into small pellets which sink and then quickly expand when put in water.

These soybean shells are a convenient source of protein, a great aid for freshly molted shrimp trying to re-harden their new exoskeleton.

The greatest benefit to this food is that it won't break down and pollute your water with ammonia or nitrate, it can be safely left in the tank indefinitely. The flakes allow tiny mycelia to grow, which are basically microscopic mushrooms, which then get picked off by the busy hands of a hungry shrimp.

To avoid ever having to worry about your tank going hungry, you could simply add a pellet of snowflakes every time the previous one's gone, perhaps once a week.

Pellets made explicitly for shrimp to eat are a fantastic first food for newcomers to get. Lots of research has been put into working out which nutrients are required and in what amount, so you can drop in a single pellet with the confidence it has everything they need to thrive until you get different types of food. 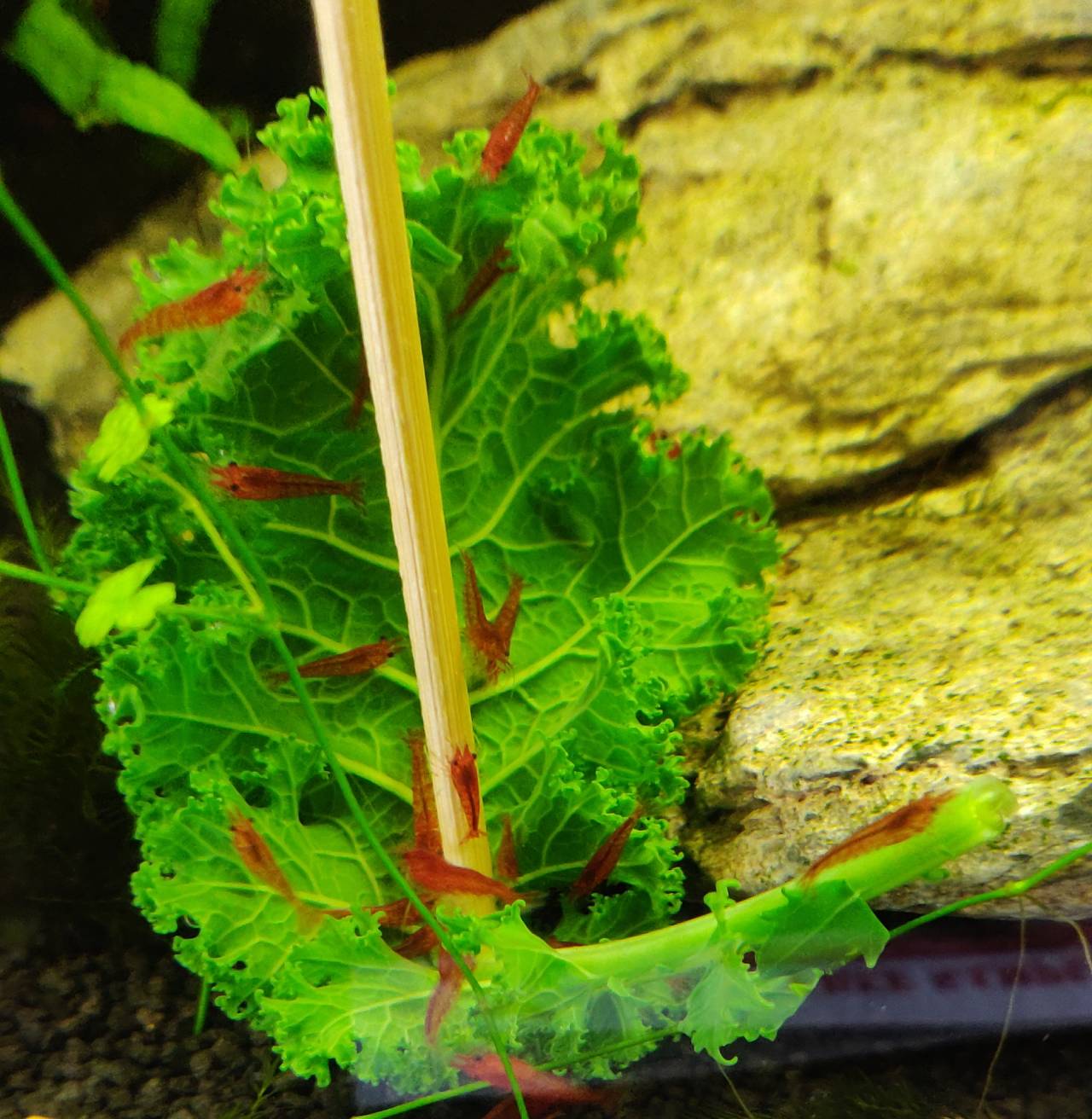 You should try to buy organic vegetables, or grow your own at home so you can have confidence they're pesticide free, otherwise you risk potentially feeding your shrimp poison-laced dinner.

To prepare your veg you should wash it under the tap and then blanch it. Blanching involves boiling the vegetables for a short period of time, just until it's soft, and then moving it into a jug of cold water to halt the cooking process. Just before you're about to add the blanched snack into your tank you should give it a quick wash in old tank water, or just fresh dechlorinated tap water.

As this type of food can decay reasonably quickly, keep an eye on how much they eat and try to remove any leftovers within a few hours.

A lot of new keepers will assume that algae problems are a thing of the past after adding shrimp to a tank. In reality only a few types of algae will get eaten by them, particularly the softer variants. You'll still get the tougher varieties spreading over your glass wall unless you've introduced a snail clean up crew too.

Whilst some algae will get eaten, you should not rely on your shrimp to deal with an algae outbreak. You should instead try and identify and treat the root cause of either too much light or too many nutrients in the water.

There are a whole load of natural goodies baked into the bee pollen balls, such as calcium, potassium, iron, protein, and many more.

As they tend to dissolve quite quickly, you can carefully drop a few balls onto the surface of the water and let the current spread the pollen spores around the tank. You'll see a powdery stream of dust drifting down from the surface and your shrimp will swim around trying to collect it all. This method also prevents fighting and crowding round a tiny ball of pollen ensuring that all inhabitants get an opportunity to enjoy some.

One other commonly used food is an algae wafer, usually marketed for bottom feeder fish. The wafers generally hold together well but some of the more selfish shrimp might manage to steal a chunk and run off to a hiding place for some quiet time.

Shrimp lollies make for an exciting special treat every so often. There are various different flavours available so you can experiment to see which your tank mates prefer.

They usually won't last very long and you'll be able to see the tasty coating being eaten off of the wooden stick as they all work their way around it.