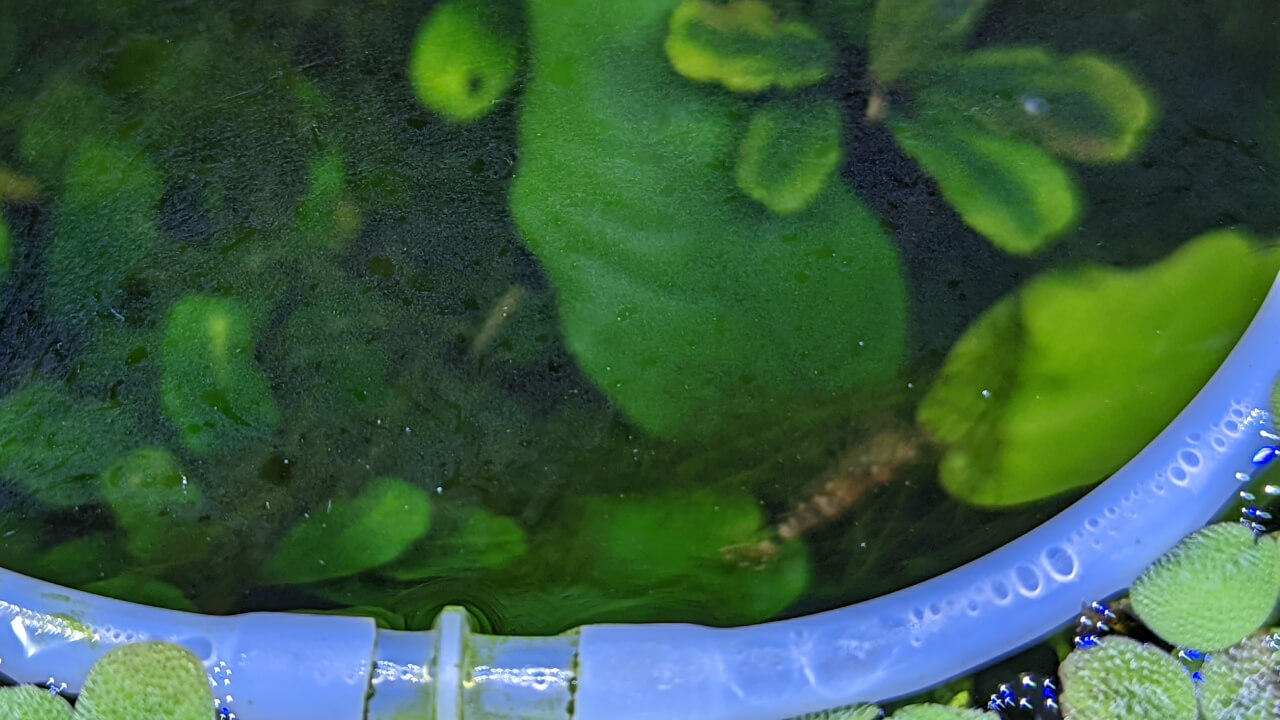 Building up a healthy amount of biofilm in your shrimp tank is one of the best ways to keep your shrimp healthy and happy.

Having a large amount of biofilm growing in your tank is a great indicator of your tank’s health, it’s a very positive sign.

In the wild, biofilm would make up the vast majority of their diet, as it grows on all the rocks and leaves in natural streams. We should try our best to replicate their natural habitat in our tanks, and growing biofilm is a great way to do that.

Biofilm refers to a massive group of different bacteria, algae, and fungi, which shrimp and snails love to eat.

These tiny microorganisms produce a clear slime that helps them grip on to the hardscape, plants, and substrate in your aquarium. This slime around the bacteria is known as the Glycocalyx, literally meaning “sugar coat”, which your shrimp will find to be quite tasty and give them plenty of energy.

Think of the biofilm in your tank like a battery for your shrimp. If you let it build up (fully charge), it can slowly release food (energy) to your shrimp colony over a long period of time. A small amount of biofilm (low battery) could run out of energy and mean you need to add other foods to keep the tank healthy.

Growing more biofilm is one of the main reasons why it’s highly recommended to let your shrimp tank mature for a few weeks after cycling. This will also give your baby shrimp a much better chance of surviving and thriving. It’s important to note, though, that just because you’ve got lots of biofilm, it doesn’t mean your tank is cycled. You should still test your water parameters before adding your shrimp.

In a tank without much surface agitation, you might find a thin layer of oil floating on top of the water. This is partially made up of their slimy coating, and should be removed to keep gas exchange in the water safe for your shrimp.

Don’t mistake algae and biofilm as the same thing, they’re quite different. Just because you can see algae growing in your tank, it doesn’t mean there’s also lots of biofilm. Likewise, you can have plenty of biofilm without having much visible green algae.

Fortunately, shrimp are just as happy to eat algae.

Biofilm does not need light to grow, just nutrients in the water.

You might be able to see some biofilm once it’s built up quite a thick layer. It’ll look like a transparent or slightly cloudy jelly spread over your hardscape. At normal levels, you won’t really be able to see it with our eyes, it’ll be spread too thin.

In fact, having too much biofilm can be bad, and we’ll explain that in more detail later.

How to grow more biofilm

You’ll be able to tell whether your shrimp have enough biofilm to eat if you see them constantly picking at things in the tank and eating. They naturally graze on tiny portions of food all throughout the day.

Tanks with a rich supply of biofilm will usually have the best success with breeding, the shrimp can be confident there's enough food for future generations.

If you’re concerned you don’t have enough, or just want to encourage more growth, try these tips:

The biofilm should start to grow in a few days, but it can take a few weeks before it builds up to a useful quantity.

Feeding your shrimp more food has a couple of benefits when you’re trying to grow more biofilm.

Firstly, giving them something else to eat, that’s not biofilm, obviously means there’s more to go around later.

Secondly, any uneaten food may break down a little in the water, and release some extra nutrients for the biofilm to use for faster growth. 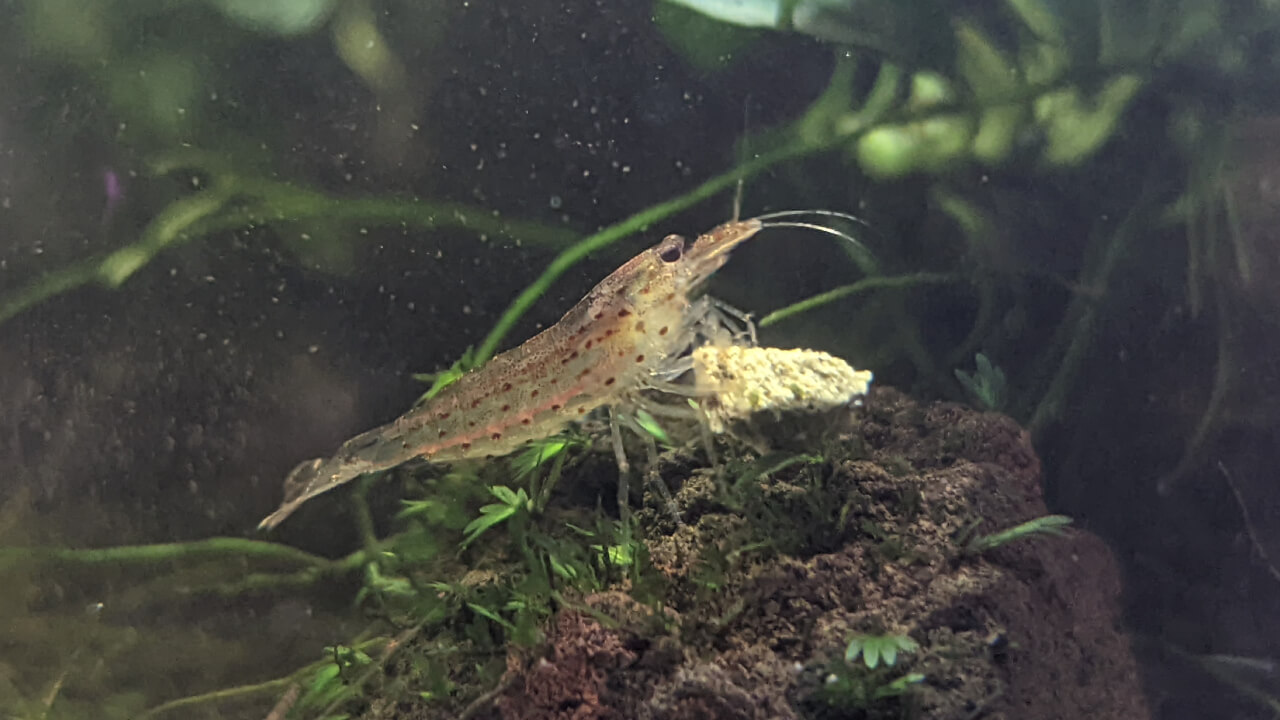 However, you don’t want to overfeed too much or too often, as it can have a dangerous effect on your water parameters. Ammonia, nitrite, and nitrate can all increase with food starting to rot in the water, and all of these elements are highly toxic to shrimp.

Excess food laying on the substrate could also lead to an infestation of Planaria, a small worm that can sometimes hide in your substrate.

Adding snails to your tank will help prevent overfeeding, as they’ll break down more of the food before it becomes a problem. You’ll need to experiment to find the right balance of food for your tank.

Try using more powdered foods in your tanks, it’ll spread out the nutrients more evenly, making it easier for the biofilm to consume.

Having a balanced water flow from your filter will help to push the particles all around the tank for healthy coverage.

Some examples of good powdered foods for shrimp tanks are:

Unfortunately, it’s quite easy to overdose the tank with powdered foods, so be careful to read the instructions carefully. You don’t want to risk accidentally crashing the tank’s cycle, or suffocating the water of oxygen. This risk is explained in more detail below.

The larger leaves provide massive amounts of surface area to grow on, and the leaf will slowly break down in the water, slowly releasing nutrients for the bacteria to thrive.

The leaves below are all great choices in shrimp tanks:

Alder cones, tiny pine cones that are safe for shrimp tanks, are another option to provide more surface area for bacteria to grow on.

However, alder cones and some leaves listed above will release tannins into the water. This can make your water appear darker, and lower the pH as the tannins convert into tannic acid. This is perfectly healthy and not a problem, but just something to be aware of.

Just like with leaf litter, adding more hardscape simply gives the bacteria more room to grow and build up a sizable population.

Driftwood is very fibrous, allowing the bacteria to move in easily. It may also gradually release organic materials into the water, which can be helpful food to boost the size of the bacteria colony. Cholla wood is another fantastic type, as it also gives your shrimp more hiding spots.

Having plenty of hiding spots for your shrimp is important to help them feel safe, especially after molting.

Lava rock is covered in a massive amount of tiny holes, perfect for settling a family of bacteria. Your shrimp will love climbing over lava rocks and picking all the food off it later. This feature, along with its cheap price, explain why lava rock is such a popular choice in shrimp tanks.

Moss is a brilliant type of plant life for shrimp tanks. It’s very low maintenance, can tolerate low light, and the hairy vines are very efficient at collecting up small particles for shrimp to eat.

The tiny pieces of trapped detritus in the mossy vines are also a valuable food source for the biofilm and other similar bacteria.

There are lots of different varieties of aquatic moss, e.g. Java, Christmas, Weeping, etc. so you can find the perfect look for your setup. If for some reason you’d prefer not to add moss, you can get a similar effect with the fluffy roots of some floating plants instead, like Salvinia.

Biofilm will grow everywhere in your aquarium, given enough time. The substrate in your tank can hold a surprising amount of it.

Frequently cleaning the gravel could slow the growth of biofilm for a few reasons.

First of all, shrimp waste resting on the floor will slowly break down and release small amounts of nutrients into the water, something the bacteria will very much appreciate.

The vacuuming process can disturb the substrate a lot too, so as well as removing some of their food source, you may also be sucking up some biofilm, or burying it under clean substrate.

You don’t have to stop vacuuming the gravel, but if you’re struggling to build up the biofilm quantity you’d like, try to find a balance with less frequent vacuuming.

I want to make it clear that it’s probably not a good idea to increase your aquarium’s temperature just to promote biofilm growth, especially if you’ve already got shrimp living in it.

Having said that, if you’ve got a freshly cycled tank that you’re trying to age and mature, then this might be a good idea for you. Assuming your water is resting on the lower end of the recommended range for your shrimp species, experiment with increasing the temperature to the higher end of the scale.

As a general rule of thumb, bacteria will thrive and reproduce faster in warmer environments. The focus of your water parameters should be on what your shrimp prefer, though. As soon as you’ve got shrimp living in the tank, their safety and preferences should be the top priority.

So, biofilm is a free food source that grows by itself, what’s not to love?

Whilst it’s generally a very safe type of bacteria and food source to have in your tank, it does have some risk if you’re not careful.

Biofilm bacteria consume oxygen from the water, just like your shrimp. In a scenario where you’ve massively increased the amount of bacteria in the tank, you risk not having enough oxygen left for the shrimp.

This is why you need to be careful when feeding bacteria-promoting powdered food such as Bacter AE, to reduce the risk of suffocating your colony.

You’ll be able to spot this easily by seeing your shrimp hanging around the water surface, gasping for air, or trying to climb out of the water.

Fortunately, this can be dealt with quite simply, such as by adding an airstone, moving your sponge filter, anything to get more surface agitation.

An airstone will push oxygen directly into the water, making it more readily available for your tank’s inhabitants. The bubbles popping at the water surface will also help to break down any biofilm floating on the water surface, preventing fresh oxygen dissolving in from the air.

The surface biofilm not only blocks oxygen from getting in, it also restricts carbon dioxide from leaving the tank. As the amount of carbon dioxide in the water increases, it produces more carbonic acid, which then lowers the pH level of the water. In tanks with a low buffering capacity (Carbonate Hardness), this can lead to a swing in parameters and stress the shrimp.

In some cases, the biofilm bacteria could also outcompete the beneficial bacteria living in your filter, suffocating them and causing your cycle to crash.

When you think you’ve got too much biofilm, there are a few ways you can try to reduce the amount in your tank.

From the water surface

Introducing some surface agitation, like with an airstone, or with a filter like a Hang on Back (HOB), will help to break down the oily layer. As the air bubbles burst, they’ll disperse the coating into smaller parts that can dissolve into the water more easily.

This is the recommended solution here, as it prevents the problem at its source, rather than just dealing with the side effects later.

You could also just carefully scoop out the top layer of the water every so often, but obviously this isn’t a great long term fix. You should try to reduce the amount of this biofilm growth instead.

A paper towel is another helpful and safe way of removing this oil from the water surface. Simply place the towel over the oil and let it get absorbed into the paper, then carefully lift the towel and throw it away.

From under the water

If you find yourself in a situation where you want to reduce the amount of biofilm under the water, you can essentially just invert the instructions above for promoting its growth.