Shrimps are invertebrates, and like the majority of invertebrates they have an exoskeleton (a skeleton on the outside) to protect themselves. Molting is when a shrimp leaves its tight-fitting exoskeleton in order to start growing a new, larger one to live in.

It's very important that the water parameters are kept consistent for newly molted shrimp. Once they've left their hard shell, they will absorb some water to grow a bit larger and then wait for their new shell to harden in the next size up. For more information about why this is important, read the water changes section.

Molting is also necessary for breeding to take place, when a female shrimp leaves her hard shell she releases a pheromone encouraging males to mate with her. See the molting behaviour section for more detail.

There are a few signs in a shrimp's behaviour to look out for which can signal they might be ready to molt. The most common sign is noticing that they're spending a lot of their time standing still and not moving very far for maybe an hour or more. They sometimes won't even eat while doing this, they'll just remain motionless, only slightly moving their antennae. If you see a large number of shrimp behaving like this it might be a sign of a problem with the water quality and you should test and adjust as necessary. Assuming there are only a small number of shrimp standing still then chances are you'll be able to return in a few hours and see a fresh molt.

After molting, they are very soft and vulnerable so they'll hide for a few days until their outer shell's had a chance to harden again. It's pretty normal for keepers of tanks with a small population to see molts in the tank but no shrimp.

Breeding behaviour is started after a female molts and releases pheromones into the water enticing the males to breed with her. This will cause the sexually mature males to swim energetically all around the tank, doing laps to try and find the freshly-molted, hiding female. Once a male finds the female and they mate, the eggs will move from her saddle to down underneath her body where she will carry them until they're ready to hatch. See the Breeding Cherry and Crystal Bee shrimp article for more information on this subject.

After understanding the basics of how the molting process works, it's easy to recognise why stable parameters are really important.

When a freshly molted shrimp grows by taking in more water, they're more vulnerable to something called osmotic shock. Osmosis is the movement of water from a low concentration to a higher concentration. What this means in real terms is that if your shrimp take in relatively hard water and then you do a water change with water that's a lot softer, the softer water will try push its way into the harder water that's already been absorbed into their body. This can cause their cells to expand to a dangerous or even deadly level, and the same is true for the opposite case, but living in softer water and adding harder water will cause the shrimp to quickly take in more minerals.

Should you remove molts?

No, in most cases it's completely safe to leave the molt in the tank for the shrimp to eat.

The only cases where you would want to remove molts is after/during an infestation of parasites or bacteria as there may be parasite eggs or bacteria left in the shell and it would be unwise to leave the source of these issues in the tank.

Do shrimp eat their molt?

Yes, they're very happy to eat their old shell if you leave it in the tank as it's a great source of calcium, which is especially useful when trying to build up a new exoskeleton.

Unfortunately it's almost inevitable that every shrimp keeper will experience bad molts at some point. The vast majority of molting problems can be pinned on two key reasons: water parameters and diet.

The main reason for a failed molt is likely because the water parameters are not optimal for your species of shrimp. The two most important water parameters to check when trying to identify the cause of bad molts are General Hardness (GH) and Carbonate Hardness (KH).

Another frequently mentioned parameter is TDS (Total Dissolved Solids) which is used as a less accurate simplification of the water chemistry and can vary a lot with tap water, depending on your location .

If you are noticing deaths in your colony shortly after performing water changes, check the water changes section for suggestions.

Our Shrimp Suggester tool can help you to check your water parameters are optimal for your shrimp.

A less common but other possible reason for molting issues can be attributed to their diet, typically focused on calcium and protein content. Try to give your shrimp a varied diet such as algae wafers, blanched vegetables, bio film, and shrimp-specific foods (e.g. Shrimp King Complete).

Snowflake food is a great source of protein and can be left in the tank until it's eaten without worrying about it polluting the water. The snowflake food, comprised of soybean shells, works by promoting the growth of something called mycelia: the vegetative part of fungi. There is generally a lot of good nutrition in this mycelia so it'd make a great addition to your feeding schedule.

The White Ring of Death is one of the most common and recognisable molting issues, identified by a solid clear/white line wrapping around the shrimp's body just behind where the head separates from the body. The image below shows a red cherry shrimp with a mild case of the White Ring of Death.

When a shrimp takes in water to grow in size and break its current exoskeleton, it's supposed to split at the top just behind its head (see the image below), allowing it to bend its head and body through the gap and quickly jump out, leaving its old shell behind. 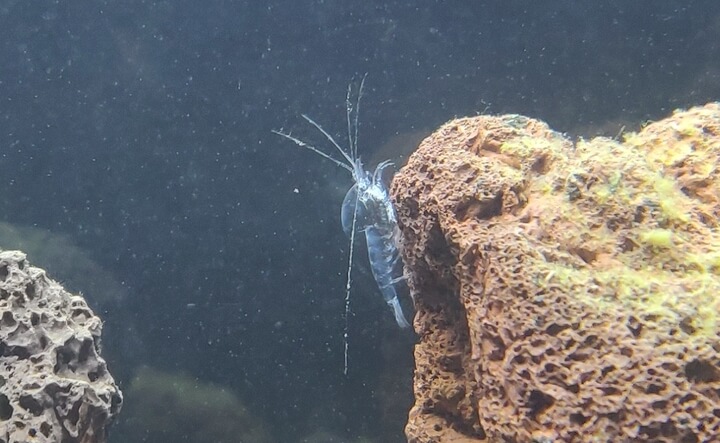 However, this is where the issue appears. The White Ring of Death occurs when the shell breaks all around the body instead of just at the top, exposing their clear/white body parts. Essentially at this point the shrimp has two disconnected exoskeletons which makes it much more difficult to bend and jump out of. As a result they can get stuck in their molt, become stressed and potentially die within a couple of days.

Whilst it is unlikely that a shrimp will survive long after developing a white ring, it's not a death sentence. It is possible that the shrimp could still escape from the outer shell and go on to live a long, happy life.

Check that your water parameters, specifically GH, KH, PH, and TDS are stable and in a healthy range for your species. If everything looks correct then look into supplementing nutrients into their diet.

You may on occasion notice shrimps lying on their side, possibly motionless or constantly twitching. Unfortunately this could mean that they're trying to molt but have gotten stuck somehow. This could be because their shell broke in the wrong place for example and now they can't make their escape from their old exoskeleton.

Sadly, there's often nothing that can be done to help in these cases. There's a chance that the shrimp will eventually free itself from the molt but this will not always work out.

Some keepers have mentioned that in some cases they've held part of the old shell very carefully with tweezers to give the shrimp some leverage, allowing them to finally swim out to freedom. This won't always be possible though and you should exercise extreme caution with these fragile creatures, only consider this option as a last resort.