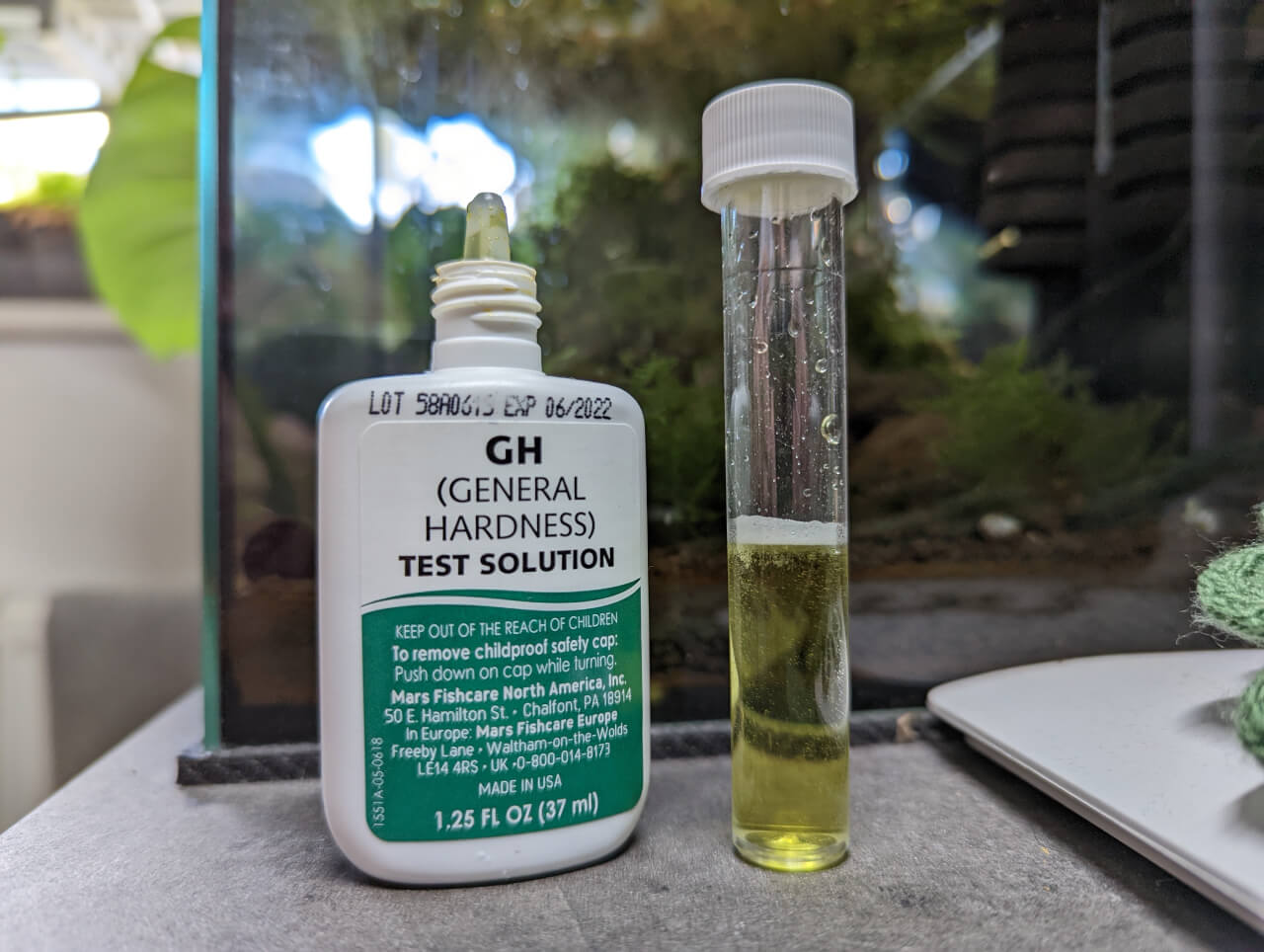 The General Hardness (GH) is a measurement for how hard or soft water is. Technically, it refers to the amount of calcium and magnesium ions in the water.

It's usually measured in dGH (degrees of general hardness) but can sometimes also be measured in ppm (parts per million).

As a rough guideline: soft water is considered to be anything under 6 GH, moderate hardness between 6 and 12 GH, and very hard water will be above 12 GH.

Remember that the GH refers to both the calcium and magnesium levels. If your general hardness level is within the safe range, but you're still experiencing molting issues, it could be that your calcium is high whilst your magnesium is low or vice versa.

Why it's important for shrimp

Keeping the general hardness under control is very important for your colony's health.

Check the relevant species page to find the right water parameters for your shrimp, but as a general rule of thumb:

The hard elements dissolved in the water ensures that there are enough salts and minerals for muscle and shell development. Roughly once a month each shrimp will molt, and if the mineral balance isn't quite right it can cause them molting problems.

For example, if the GH is too low, it can prevent the shrimp taking in enough calcium to form a healthy new exoskeleton. Their shell will instead be soft and flexible, and this can make it very hard to break out of, causing a failed molt.

On the opposite end of the spectrum, if the GH is too high instead, they could build a shell that's too tough to break and also get stuck in a failed molt.

Unfortunately, failed molts can be quite a common cause of death, and you don't get much warning.

Snails in your tank will also appreciate the calcium and magnesium in the water for growing their shells. You might notice weak/broken shells if the GH is too low.

Planted tanks will make use of the magnesium too. A common sign of magnesium deficiency in aquatic plants is the leaves turning a lighter colour but the veins staying dark.

Limestone, for example, is essentially calcium carbonate, which will raise both the calcium (affecting GH) and carbonate (KH) levels in the water. So it can be confused as causing a single “hardness” increase, but it's actually 2 distinct types raising at once: general and carbonate.

Most tap water, especially in the UK will contain limescale/limestone, this is what causes the mineral build-up in kettles. If you're using tap water rather than remineralized RO water, there should be plenty of GH and KH already.

How to measure GH

Measuring the GH and KH is incredibly easy when you've got the right testing kit. 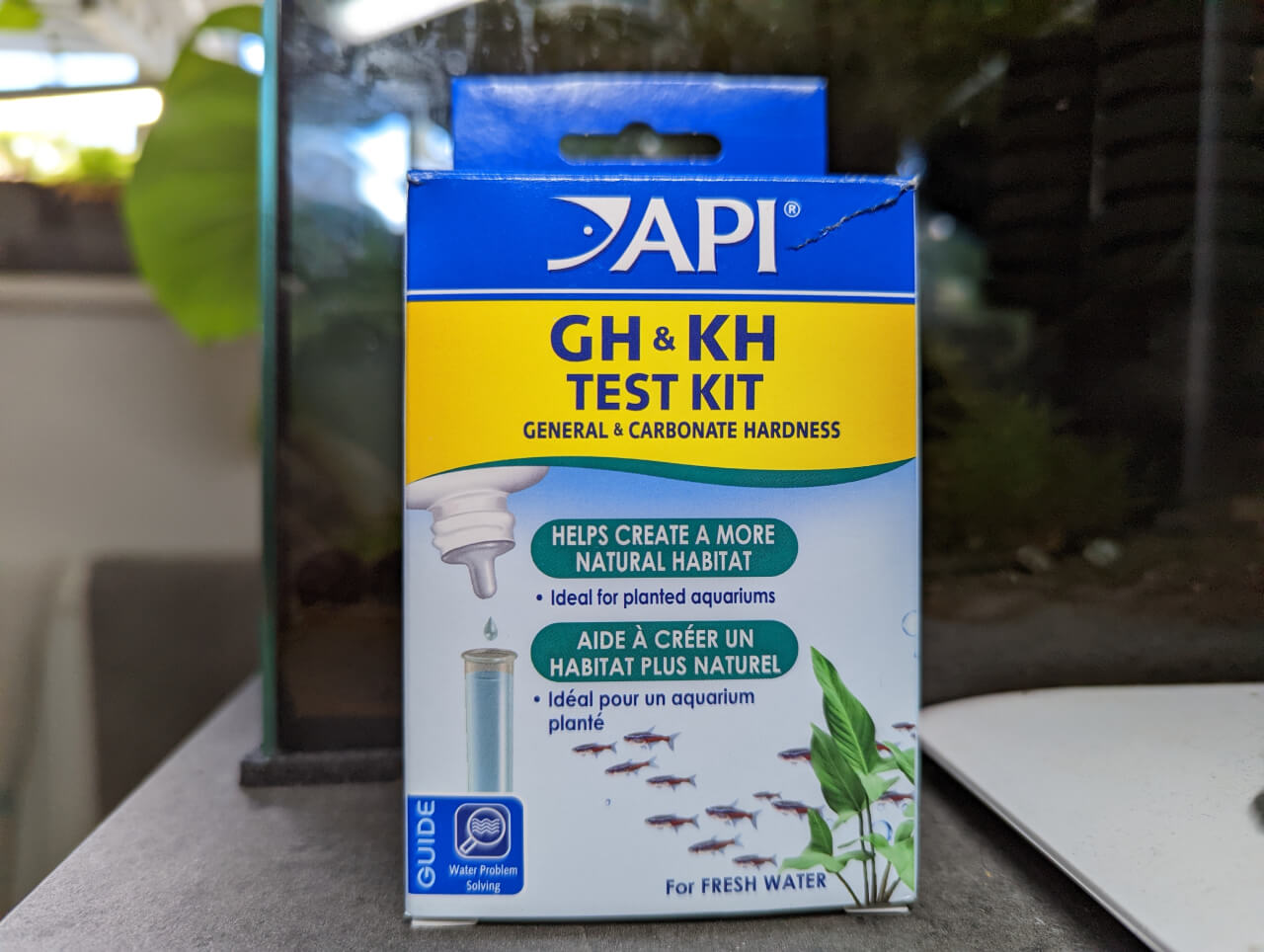 The instructions below are specific to API's freshwater GH test kit:

Make sure you hold the test liquid bottle vertically (completely upside down) so that the drops are all the same size. If you tilt the bottle instead you might trap air bubbles and cause the drops to be different sizes, which will give you an inaccurate result.

The number of drops required to change the water colour gives you the dGH.

For example, if your water changes from orange to green after 5 drops of the GH test fluid, your water measures 5 dGH.

As with all water parameters, don't panic just because some parameter is slightly over a specific number. Shrimp prefer stability above almost everything else.

You should only try to reduce the general hardness if you notice any of the symptoms below or you're much higher than the safe range for your species.

The following symptoms don't always mean that the GH is too high, but they can be useful clues.

How to reduce GH

You can use any of the following options to try and reduce the general hardness level. You should pick one and slowly monitor for changes rather than doing all of them at once.

Don't panic if your general hardness is just below a specific value. The shrimp will appreciate stable parameters more than hitting some specific number target.

Only try to increase the GH if you spot any of the symptoms below or your water is a lot lower than your species’ safe parameter range.

These symptoms don't necessarily mean that the GH is definitely too low, but they are helpful clues.

How to increase GH

Use any of these methods to increase the water hardness, but preferably only one at a time. You don't want to swing the water parameters too much too quickly.