Snails in a Shrimp Tank

Snails can be great tank mates in a shrimp tank but deciding whether to add snails to your shrimp tank can be difficult.

This article will explain both the advantages and disadvantages to help you make your decision.

There are a lot of different species of freshwater aquatic snails but this article will only cover the most common species.

The Malaysian Trumpet Snail (MTS) is a fairly popular species best known for its quick breeding and substrate stirring activities. The two most common colours are black or cream, and both will typically have a slightly spotty or stripey design on their shell.

After adding this snail to your tank, you'll almost certainly start to see some baby snails on the glass within a few weeks. This is not necessarily a bad thing though, as it allows you to start with a small colony that grows quickly and makes your substrate stirring team even more efficient.

This species of snail can also live in a wide range of salt levels, allowing you to add them as tank mates for Opae Ula shrimp when acclimated correctly. 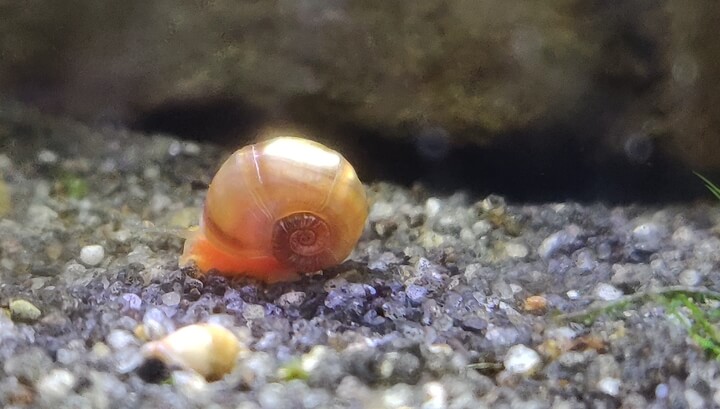 Ramshorn snails come in a range of colours and shell patterns including brown, yellow, blue, pink, red, and white, leopard-spotted, plain, and more. You can see more information about the types of ramshorn snail shells on Cubby's Aquatics.

These snails are attractive to shrimp keepers because of their strong colours, they stand out brilliantly against deep green plants in planted tanks much like a shrimp would.

As well as being pretty to look at, they're also algae eating powerhouses and prolific breeders. These snails are not asexual but they are hermaphroditic, meaning they have both male and female sexual organs but need another mate in order to breed.

The Nerite snail is another common aquarium snail often kept for its efficiency in eating algae and inability to breed in freshwater.

It's impressive how quickly these snails can eat through algae on your rocks, wood, plants, and glass - which is one of the main reasons why it's so popular in among aquarium hobbyists.

Another reason for its popularity is due to the fact they cannot breed in freshwater, their young require a brief period of brackish conditions. As the adults don't survive in brackish water this makes them incredibly difficult to breed in captivity and impossible for most hobbyists.

However, despite the fact they won't be able to produce any babies, they will still deposit small, white, hard eggs everywhere in your aquarium. These eggs are tough to remove, even from glass, so any attached to your hardscape should probably be left alone until they dissolve on their own and disappear after a few weeks.

Only the females will lay these eggs ready for a male to come and fertilize them, but it's essentially impossible to identify a Nerite snail's sex by their appearance, so you'll need to hope for a male if you want to avoid the eggs. Some hobbyists keep their new snails in a separate container for a few weeks to see if they lay eggs before adding them to their main tanks.

Pond snails are one of the most common pest snails likely to be introduced with new plants as they often lay dozens eggs on leaves.

These snails will also breed asexually and very quickly, meaning that it's very difficult to remove them all once they're in your tank because they can regrow the population back from a single snail. Their eggs will take around 2-4 weeks to hatch and then they'll be sexually mature and producing their own eggs at around 6-8 weeks old.

Bladder snails are similar to pond snails and often misidentified.

Just like Ramshorns, these snails are hermaphroditic so require a mate to reproduce.

These other species of snails are also used in aquariums but are not found as often with shrimp keepers.

Which are the best snails for a shrimp tank?

The best snail for your shrimp tank will be determined by what you're trying to achieve. They all provide similar advantages and disadvantages but to simplify the popular options:

A common misconception is that snails will eat the plants in your aquarium but this is not entirely true for most snails.

For example: Malaysian Trumpet, Ramshorn, Nerite, Pond, and Bladder snails will only eat the decaying parts of a plant, so while it might look they're eating your new plant, they're only eating the bits that have already died and would otherwise decay.

However, some other species of snail like Mystery or Apple will eat almost any vegetation, whether it's vegetable leaves or your live plants.

It's important to choose the right species of snail for what your tank goals are. If you'd like to like to grow a heavily planted tank then a Mystery snail is probably a bad idea, and Ramshorn snails would be a better choice.

Live shrimp will not get eaten by any snails, with the exception of assassin snails in rare cases. On the other hand dead shrimp will be eaten by almost all snails and shrimp alike, they're very efficient nutrient recyclers.

The only times that assassin snails might eat live shrimp is when they're very old, unhealthy, and recently molted. They move a lot slower than shrimp so obviously most shrimp will swim away when an assassin snail gets too close, but an unhealthy shrimp with a soft shell might not have the energy to run. Typically other snails will be much easier prey to catch for them so they'll leave the shrimps alone until there isn't much else left to eat.

Do snails need to be acclimated?

Yes, just like with all aquatic life, it's a good idea to acclimate living creatures into their new water before adding them into the tank, drip acclimation is a common method. Whilst some snails will be fine when put straight into a tank with similar parameters, acclimating them reduces any stress and reduces the risk of health issues.

Snails are a lot less sensitive to water changes than shrimps so a faster acclimation process is possible, i.e. just float the bag they came in for around 30 minutes in your tank.

Burrowing snails, like the Malaysian Trumpet snail, will help to prevent anaerobic gas bubbles building up in air pockets in the substrate, which would otherwise eventually release toxic chemicals into the water. The MTS will bury themselves in your sand or gravel to rest or get away from your lights until it's dark, and this causes any smaller gas pockets to be destroyed and bubble to the surface before they can develop to a dangerous level.

You can deal with this yourself by poking a stick into the sand every so often to agitate it, but having a team of snails happily do this menial task for you is a nice bonus.

Any of the snails mentioned in this article will do a decent job of eating biofilm and algae from the aquarium glass.

You should not expect crystal clear glass simply by adding snails though, whilst they will remove a large portion you should still perform routine tank maintenance to ensure the aquarium is clean and healthy.

If you're struggling with large amounts of algae on the glass you should look into reducing the light and/or nutrients in your tank instead of relying on snails to handle it alone.

Many hobbyists utilise snails as a food cleanup crew so that they don't need to consistently remove uneaten shrimp food after a few hours. Some foods like snowflake pellets can be left in the tank for days without polluting the water, but others will decompose a lot faster and potentially become a source of ammonia and stress your shrimp.

Keeping a healthy colony of snails to handle any extra food adds a safety net to the ecosystem and prevents overfeeding becoming a big issue.

Snails also work well as canaries for your tank's water quality and parameters: if you notice them all rising to the surface or hiding in their shells then that's a strong sign you need to test and adjust your water parameters.

Depending on how much food is available in the tank, the snail population might explode a lot higher than desired leaving the walls covered in snails and blocking the view.

To deal with this you'll need to manually remove the snails with traps, because the majority of chemicals used to kill snails are also deadly to shrimp (i.e. copper).

An extremely simple shrimp-safe trap is to add a blanched vegetable leaf, such as spinach, for a few hours and then remove it after about an hour, or once it's covered in snails. The shrimps will simply swim away when you pull it out, leaving you with a snail-coated leaf.

One other alternative method is to add assassin snails to your tank which will gradually reduce your pest snail population until it's more manageable or even entirely cleared. However, be aware there are rare cases where these snails might eat shrimp.