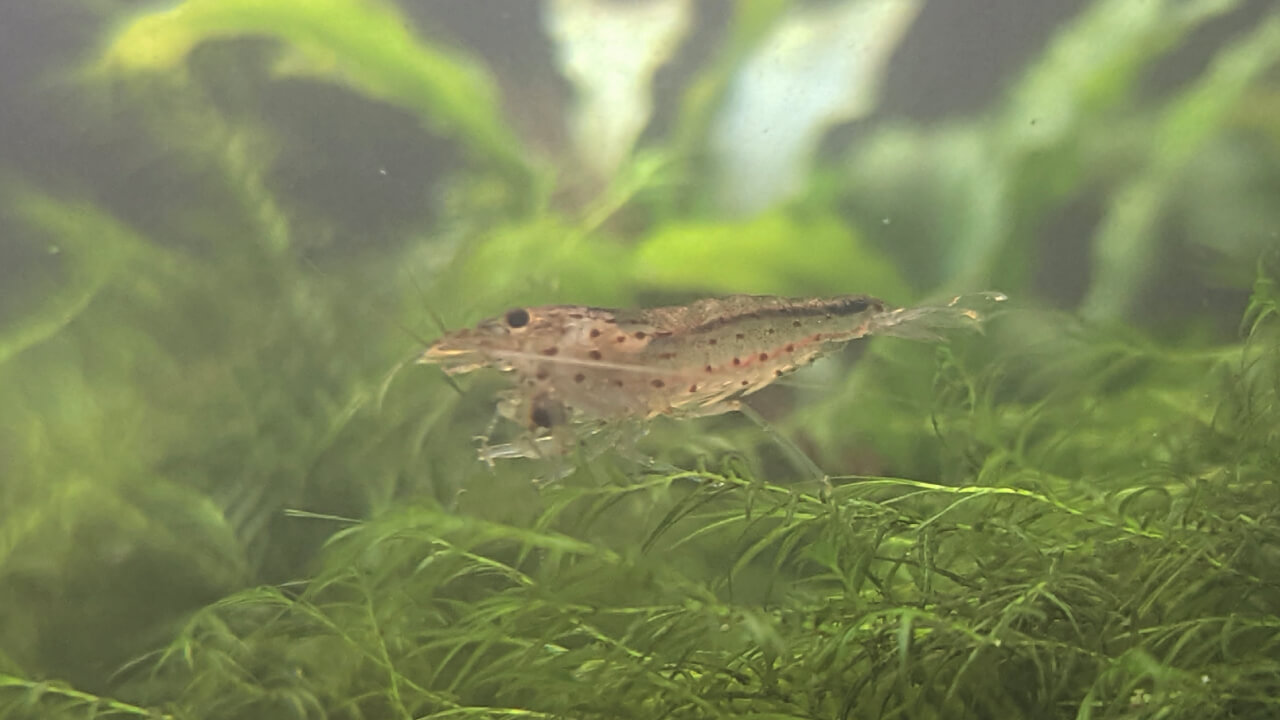 The Amano shrimp is one of the most popular among shrimp keepers, right alongside the famous Red Cherry shrimp.

They're named after Takashi Amano, a famous and highly respected Aquarist and Aquascaper, who discovered that they had the ability to eat such a large amount of algae in his tanks. This algae-eating trait is likely the main reason they're so popular today. 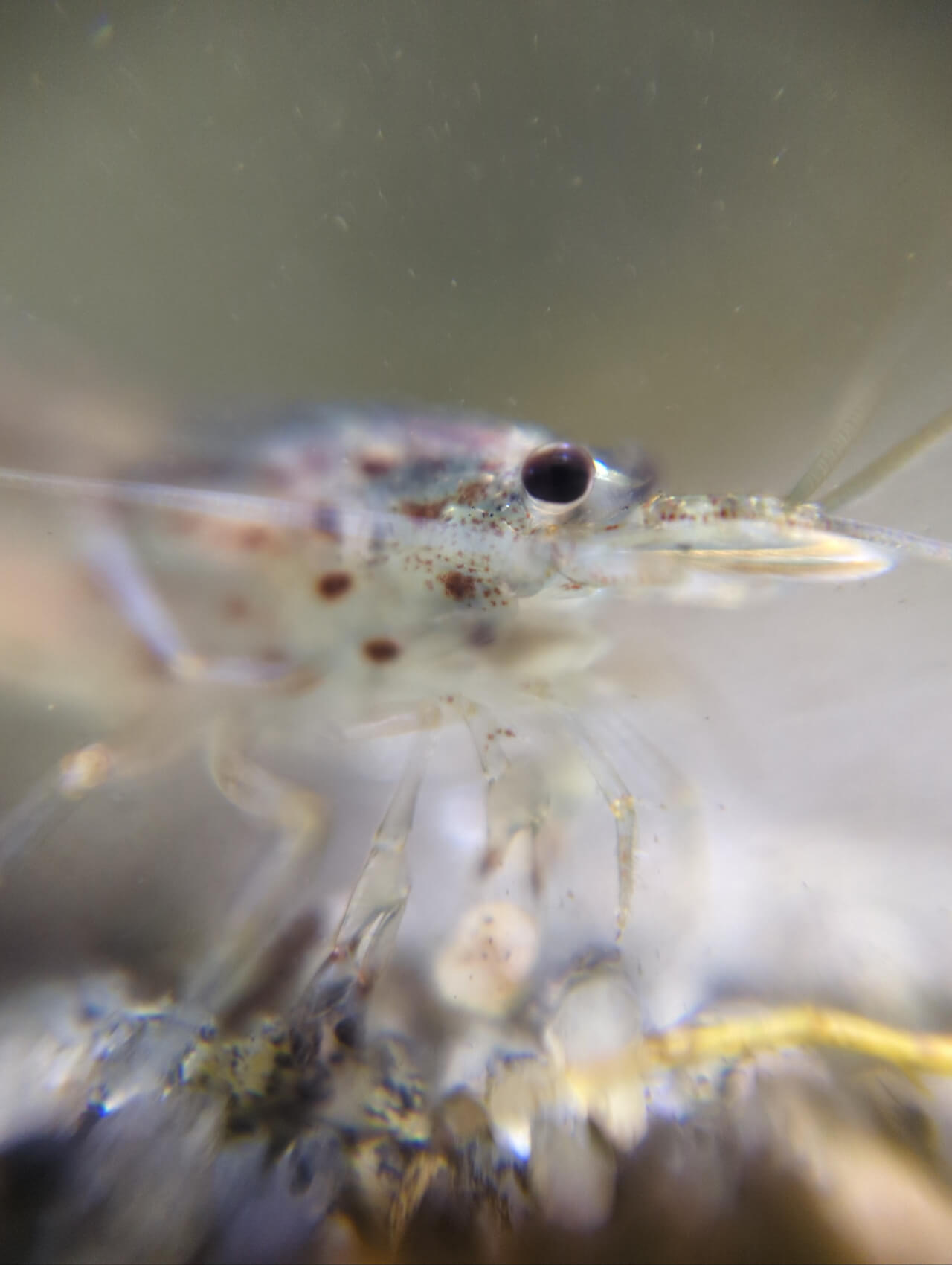 A mature Amano shrimp could grow up to 5 cm (2 inches) in size, making it one of the largest dwarf shrimp.

Amano shrimp don't really have a grading system like you get with various Neocaridina or Caridina morphs as they're almost entirely see-through.

They've got a mostly transparent or slightly grey body with either red-brown or blue-grey spots and stripes along their sides. It's usually possible to identify the shrimp's sex slightly easier than with Cherry shrimp by looking at the stripes/dots - males will have neatly spaced spots whilst females typically have short lines instead.

Amanos are incredibly hardy and can thrive in a very wide range of water parameters. From soft water with a GH of 5 and a KH of 0 all the way up to very hard water with GH: 15 and KH: 10. As long as you keep your parameters stable they're not fussy, and are a great choice for your first shrimp.

Water with a pH that's roughly neutral is best, try to keep the pH between 6.0 and 7.5, but they'll probably be fine a little under or over. Again, consistency is key with keeping shrimp happy, don't change things just because a number is slightly outside of a specific range. If they seem happy and healthy, leave them be.

They don't require a heater in their tank unless you live in a very cold climate. They're happy being around 18 °C in the winter, and can tolerate their water going up to about 28 °C in the summer.

They're not fussy about substrate choice but if you'd like to try and replicate their natural environment then gravel or small rocks is a good choice. They're native to Japan, China, and Taiwan, living in large groups in freshwater streams. Using a Hang on Back filter would also provide the tank with plenty of flow simulating their natural home in the rivers.

Freshwater shrimp molt roughly every 3 to 4 weeks, and the Amano is no exception. After they've shed their protective shell they'll feel a bit vulnerable and try to hide for a few days, this is normal molting behaviour. Don't panic if you haven't seen your Amano for a couple of days, their transparent shells and hiding skills can make them hard to spot sometimes. You can help them through this by making sure your tank has plenty of plants or other hiding spots, and the water parameters are in the healthy range.

With a nickname like algae shrimp it'd be easy to think that's all they eat. It's true that Amanos are great at eating up large amounts of algae but that doesn't mean that's all they want to eat. They'll happily eat soft algae like beard algae, but won't be able to get at the tougher types like green spot algae. Don't expect an Amano cleanup crew to solve an algae problem on their own, you should try and fix the root cause of the algae growth instead.

Essentially all freshwater dwarf shrimp eat the same types of food. They spend most of their time swimming around the tank, searching for tiny portions of food like biofilm and algae. If you've got a heavily planted tank they should have plenty of surface area to graze on already.

Even if you have a tank filled with plants and algae, you should supplement their diet with a range of different different foods to ensure they're getting all the nutrients and minerals they need to grow healthy. Some example foods are: blanched vegetables, algae wafers, shrimp pellets, bee pollen, shrimp lollipops, etc.

Amanos are very peaceful and calm creatures, but are known to get a bit possessive at feeding times. It's totally normal for the largest Amano to go up to a smaller shrimp and take its food in an act of dominance. They'll then run off with their tasty treat to avoid anyone else trying to take it off them or make them share. 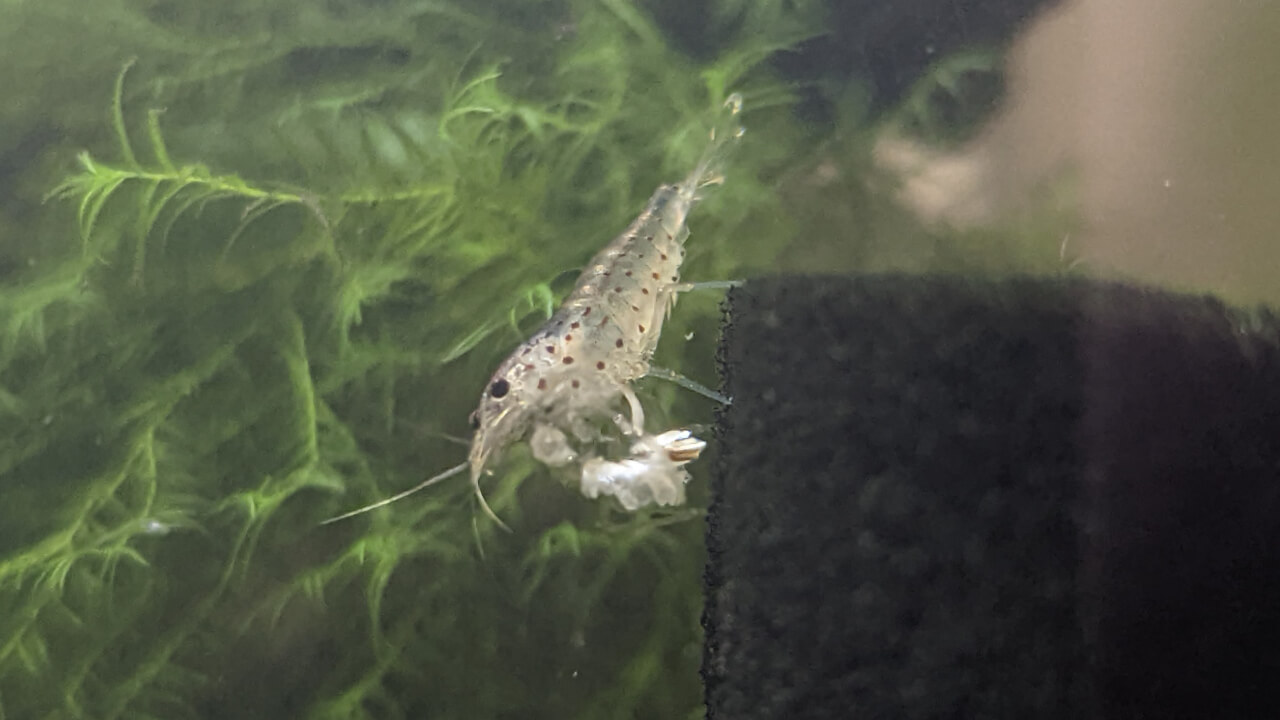 As a result of the difference in breeding behaviour, it's absolutely fine to keep Amanos in a community tank with other types of shrimp like Red Cherries, or Blue Bolts, etc. without any risk of them breeding together.

Combining these shrimp with other freshwater snails like Ramshorns or Nerites will make a powerful cleanup crew and help to keep any algae outbreaks at bay.

Being a little larger than other dwarf shrimp, there's even less risk of being eaten by nano fish like Neon Tetras or Ember Tetras for example. You might find that the Amano spend more of their time hiding but should otherwise be just fine.

Breeding Amano shrimp in captivity is nowhere near as simple as it is for something like Red Cherries. The major difference between Amano and other freshwater shrimp is that Amanos require saltwater for their young to grow in their first few weeks.

As is typical for other shrimp, the male and female will mate and the female will then be berried and carry around the eggs among her pleopods (under her belly) for around 4 weeks. She will then release the babies, which are now in larvae form, into saltwater until they've finished growing into miniature adults.

Once the baby Amanos have developed from their larval stage they're ready to return to freshwater. They cannot survive in brackish water after a few weeks.

Have you noticed your Amano shrimp that's usually brown has turned a shade of blue recently, especially near their head? They can sometimes get a soft blue tint to their body when they're feeling stressed. It's likely you'll notice the blue when you first get your shrimp, travelling all the way to your place will have been quite an experience for them. As long as you're patient and drip acclimate them into their new tank, they should return to their previous natural colour soon.

Another cause of stress could be that the water parameters aren't quite right, especially if you see the shrimp swimming frantically around the tank. When you notice these signs you should test your water immediately and may need to do a water change.

Not all blue Amanos are blue due to stress however, for some of them its their natural colour. You should carefully monitor your shrimp to watch for any colour changes like this.