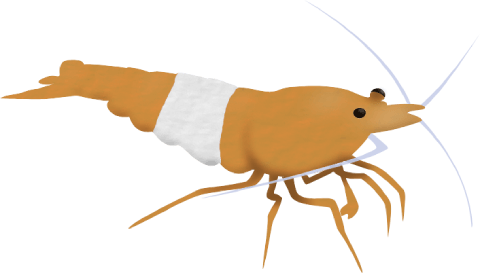 Orange Rili shrimp are a type of Neocaridina with bright orange bodies and the signature Rili band around the middle of their body. They look very similar to an Orange Pumpkin shrimp but with an added Rili body band. Being part of the Neocaridina group, they prefer living in fairly hard water.

The grade system for Orange Rili shrimp works the same way as with all other Rili variants.

The high grades will have a bold orange colour on their head, tail, and legs. All of the coloured sections should be consistent in colour, i.e. not patchy or partially transparent. The see-through band should be close to the middle of their body, it should also start and stop with a clean split.

The females will on average have the strongest shell colour and be a little bit bigger. If you're culling the lower grades into a separate tank, make sure you still leave some males in the tank for breeding.

A lower grade will be more spotty in colour, with a weaker orange tone or have a very thin transparent section around their body. The transparent band could also be too large, such as if only the very end of the tail or head is orange and the rest of the body is see-through.

It's super simple to look after Orange Rili like all other Neocaridina types as they're quite tough. You can expect them to live up to about 1-2 years old if there's lots of food and the your water parameters are solid.

They're one of the most adaptable shrimp, thriving in a variety of environments. With a KH range of 1-8 and a GH range of 4-10, they should suit most beginner shrimp tanks and will hopefully have less risk of molting problems.

Orange Rili don't require an aquarium heater unless you live somewhere that can get very cold. As long as your room stays roughly between 15-30 °C (59-86 °F) they should be perfectly happy.

Freshwater dwarf shrimp should be kept in a minimum tank size of 5 gallons (19 liters), however larger tanks of 10 gallons (38 liters) are preferred as it's easier to control the water parameters with more water.

The majority of freshwater dwarf shrimp eat the same things. They'll spend most of their time travelling about the aquarium looking for biofilm and algae, that will build on practically any surface. They'll probably have more than enough natural food to consume if your tank is established and well planted.

You can feed your shrimp common foods like algae wafers, bee pollen, shrimp pellets, blanched vegetables, etc. if you're not sure there's enough biofilm in the tank.

Sharing the tank with different colour morphs of Neocaridina could make “wild type” offspring, which are mostly translucent with brown spots/stripes. To keep your shrimp colours solid and higher grade, you should probably limit yourself to one colour per tank.

A common pairing with Orange Rili shrimp is the Amano shrimp. The Amano can grow to be a little bit bigger than Neocaridinas, and the different colour and pattern make them stand out, adding some more contrast to the tank. The Amano is a completely different species of shrimp and needs brackish water for its young to survive so there's zero chance of them breeding with your Rilis.

Most aquatic snails will get along with the shrimp in this tank since they prefer harder water, which has all of the minerals they require for proper shell development.

Smaller fish, such as Neon Tetras, can occasionally be kept in a shrimp tank. However, there is a chance that the fish would mistake your shrimp for food, so if you want to attempt this, make sure your Orange Rili have lots of hiding spots. As young shrimp are far more likely to be eaten, it's best not to have any fish in the same tank if you're trying to breed them.

When different colour Neocaridina morphs are allowed to breed together the result is normally a lower-grade copy of one a parent. For example, the babies could go look like a very low-grade Orange Rili, or a “wild type” - mostly see-through with brown patches and stripes.

By being consistent with culling (moving to a separate tank) the lower grade Orange Rilis, you'll be able to slowly increase their grade. You will need to be patient with this step as there are no guarantees with nature and you could have a blend of different grades for some time. Distinctive features like the Rili's transparent band around the body are likely to be passed on to new generations, but even that's not a certainty.

However, there are a few shrimp breeding tips you can read to try and improve your chances and hopefully speed this “upgrading” process up.