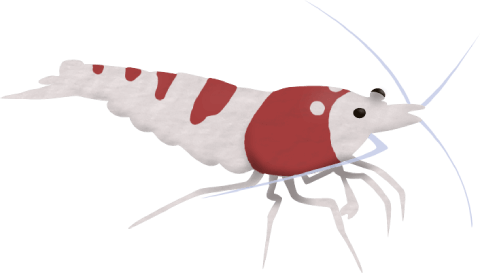 Crystal Red shrimp are a popular type of bee shrimp that originated in Taiwan, instantly recognisable by their “candy cane” bodies of contrasting white and red stripes. Their bright, vibrant colours make them stand out beautifully against the green background of a heavily planted tank.

Grading Crystal shrimp can be incredibly specific compared to most other shrimp, like Blue Bolts for example. Instead of just looking at the depth and consistency of the shell colouring, a lot more focus can be put on the exact shapes and locations of the coloured markings, how many stripes they have, etc.

High grades will have solid white and red segments with clear separating lines. As a rule of thumb, the more the shrimp is coloured white, the higher its grade (e.g. SSS).

Lower grade variants will have a weaker, patchier colouring, sometimes even being almost translucent. The separation between the colours will also be fuzzier with organic shapes instead of clean red/white lines.

The image below shows a mostly white Crystal Red shrimp, that would usually indicate higher grade. However, as its white colouring is fairly patchy with some translucent/yellow areas this lowers the grade.

The Crystal Red shrimp can be quite hardy and make a good choice for a beginner. In a healthy tank with optimal water parameters they'll easily live for 1-2 years.

This type prefers to be in fairly acidic water, being happy all the way down to around 5.5 pH. However, keeping the pH stable with such a low KH can be difficult, which is why it's highly recommend to use buffering or active substrate. This will stabilise the pH swings throughout the day as there are no/low carbonates in the water itself, which would normally do this for you.

It's important to try and keep the KH as close to the 0-2 range as possible or there's a risk they'll struggle to molt safely.

A heater is optional for keeping Crystal Red shrimp, as long as your room is normally around 20 °C (68 °F) in all seasons. If you live in a part of the world that gets really cold weather in the winter, or your tank is near a window, then getting a heater would be strongly recommended.

If you're not sure they're getting enough to eat, there are lots of different shrimp foods such as algae wafers, bee pollen, shrimp pellets, blanched vegetables, etc.

As the Crystal Red is happy to live with a pH around 7.0, it's possible to share their tank with a Neocaridina species like Red Cherry shrimp.

You can safely introduce different colour Neocaridina shrimp, like Blue Jelly, Green Jade etc. You could also share their tank with other Caridina morphs and possibly breed unique offspring hybrids. 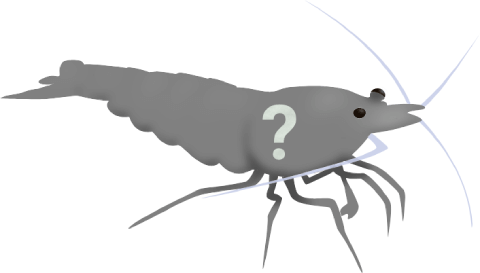 Crystal Reds are a great choice to start breeding hybrids “from scratch” as they can breed with any other Caridina and will normally pass on some white shell colouring to their offspring. Mixing a Crystal Red with a tiger shrimp like a Tangerine Tiger can eventually lead to Fancy Tiger morphs after a few generations of selective breeding.

Due to the genetics of Crystal Red and Crystal Black shrimp, it's possible for some red parents to have black offspring. The gene for the black colouring is dominant so if it's found in either of the parents’ genes it's the most likely colour for babies.

However, the black generation will still carry the genes for red colouring and it's possible the next generation switches back to include some red babies again. If you want to avoid this and guarantee the offspring remain red, you should look for a Pure Red Line shrimp instead.

If you're trying to build up a healthy population, you can read the shrimp breeding article for tips and advice.