Hydra in Shrimp Tanks - How To Get Rid of Them 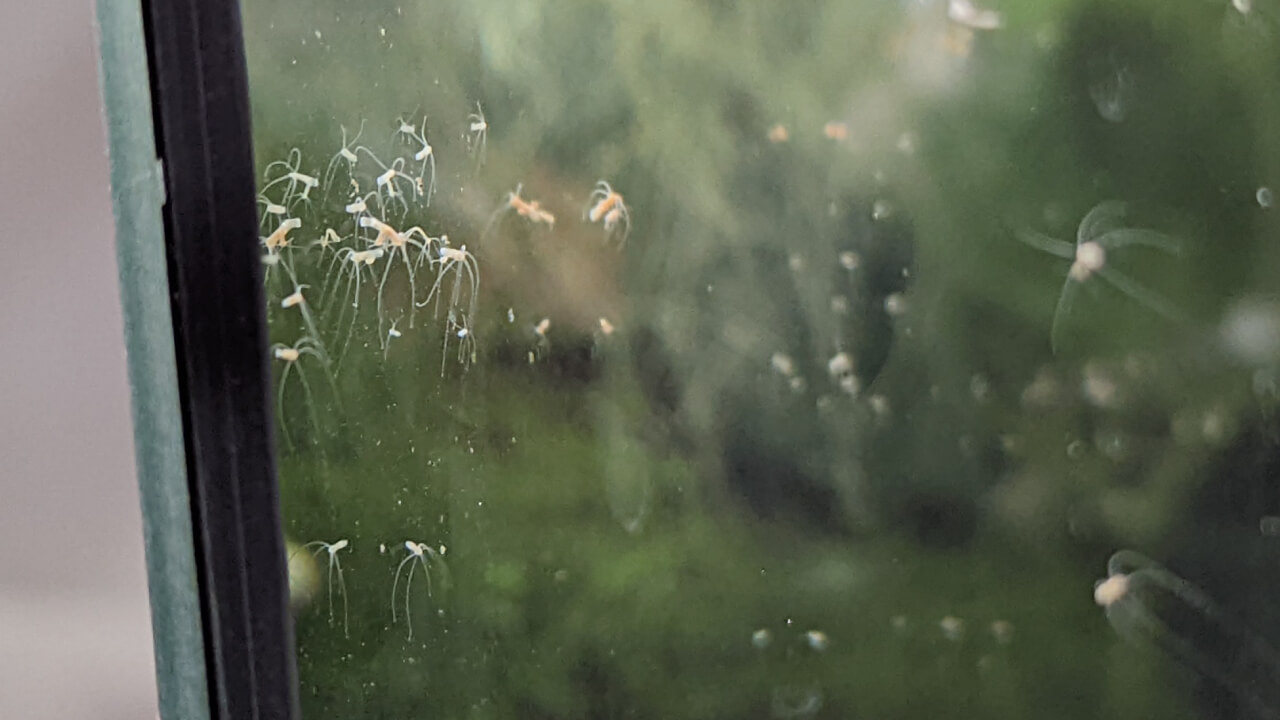 What is a hydra?

A hydra is a tiny freshwater polyp - a soft bodied pest with tentacles.

They look like a stick with jellyfish legs, and are usually white, but can sometimes be lime green.

They can reproduce by splitting themselves in half every few days. A fully grown hydra can get up to around 3 cm in size.

If you have hydra, you'll find them hanging around on your hardscape or aquarium walls. Waiting. Then, when a tiny creature swims nearby, the hydra sting them with their tentacles.

After they've attacked, they try to pull their victim towards their mouth to eat. 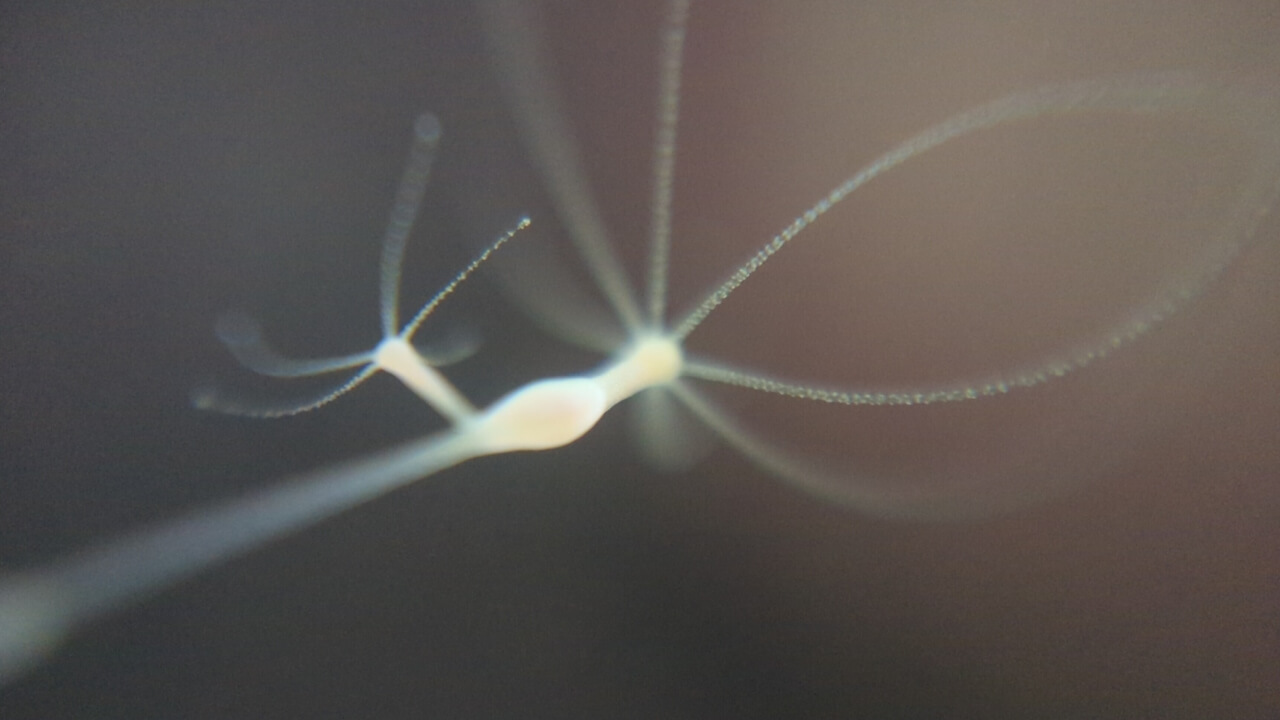 If they miss their target, they'll retract their tentacles for a while to recharge.

So they're a self-replicating tentacle monster that eats baby shrimp? How could they get any worse?

Hydras don't age. They're constantly renewing the cells in their body, letting them live forever.

Planaria worms are another aquarium pest in the immortal club.

The good news is: hydras still need to eat.

So, you can get rid of a hydra infestation by cutting out their food supply.

Are hydras dangerous for shrimp?

Adult shrimp won't be too bothered by hydra in their tank. They might get the occasional sting and dart away, but nothing major.

Don't panic if you see a couple of hydras in your tank. You want to keep their numbers low, but it's not an emergency.

You may get rare cases where old or sick shrimp get stung and attacked by hydra, but this doesn't happen often.

Baby shrimp, however, are much more vulnerable to hydra.

Baby shrimp are small enough to get really hurt by the hydra's stringers. Their shells aren't hard enough yet to fully protect them.

Combined with the fact they can fit in a hydra's mouth, it won't be a good time for babies.

What do hydras eat?

Except for baby shrimp, what else do they eat?

A healthy, mature tank will normally have a lot of little critters in it, making it ideal for hydras to grow.

They'll also eat small particles, like powdered food, if there's not much other choice.

Green hydras grow algae inside themselves 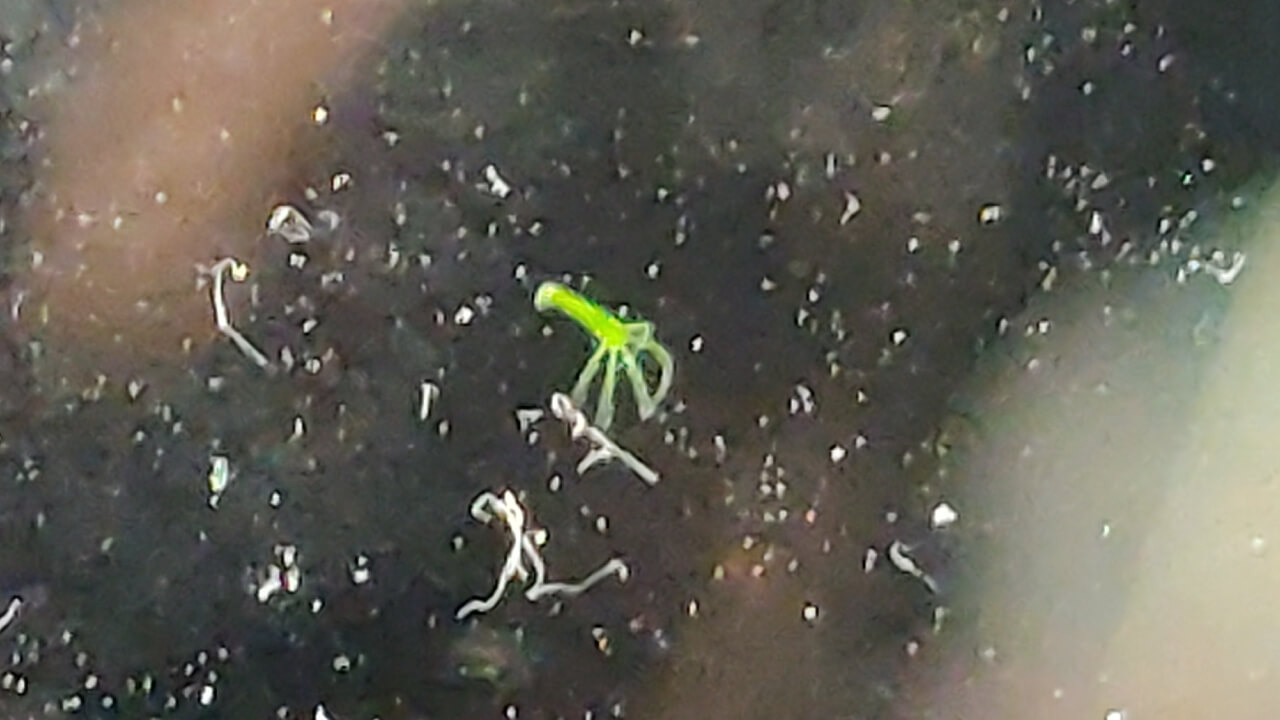 The green hydra has a very special trick up its sleeve - it can grow its own food.

Their green colour comes from a special type of algae growing inside them.

The algae photosynthesize, and produce nutrients for the hydra to take in.

By working together, they're both happy. The hydra provides some protection for the algae, and the algae provides food for the hydra.

This is why green hydra can be more of a pain to deal with. It's a lot harder to starve them when they can grow their own food.

How do hydras get into the tank?

They're really good at hiding on hardscape materials or new plants you add to your tank.

Avoiding hydra is a great reason to properly clean and prepare new hardscape pieces. With a bit of preparation, you can keep your tank hydra free.

Tips to avoid getting hydra in your shrimp tank

Don't use powdered food all the time

Feeding too much powdered food will make the perfect conditions for hydra to thrive. Copepods and other tiny creatures that live in the water will probably have a population explosion too.

You don't need to stop using powdered foods, just don't do it all the time. Use some other solid foods instead like snowflake pellets, or algae wafers every so often.

Using a feeding dish will also help keep the tank clean. It'll cut down the amount of leftover food to float around the tank later.

Boiling and scrubbing new hardscape pieces is a good idea. This should get rid of any hydra laying dormant.

Cleaning will also prevent any other unwanted pests like snails, if you're not a fan. 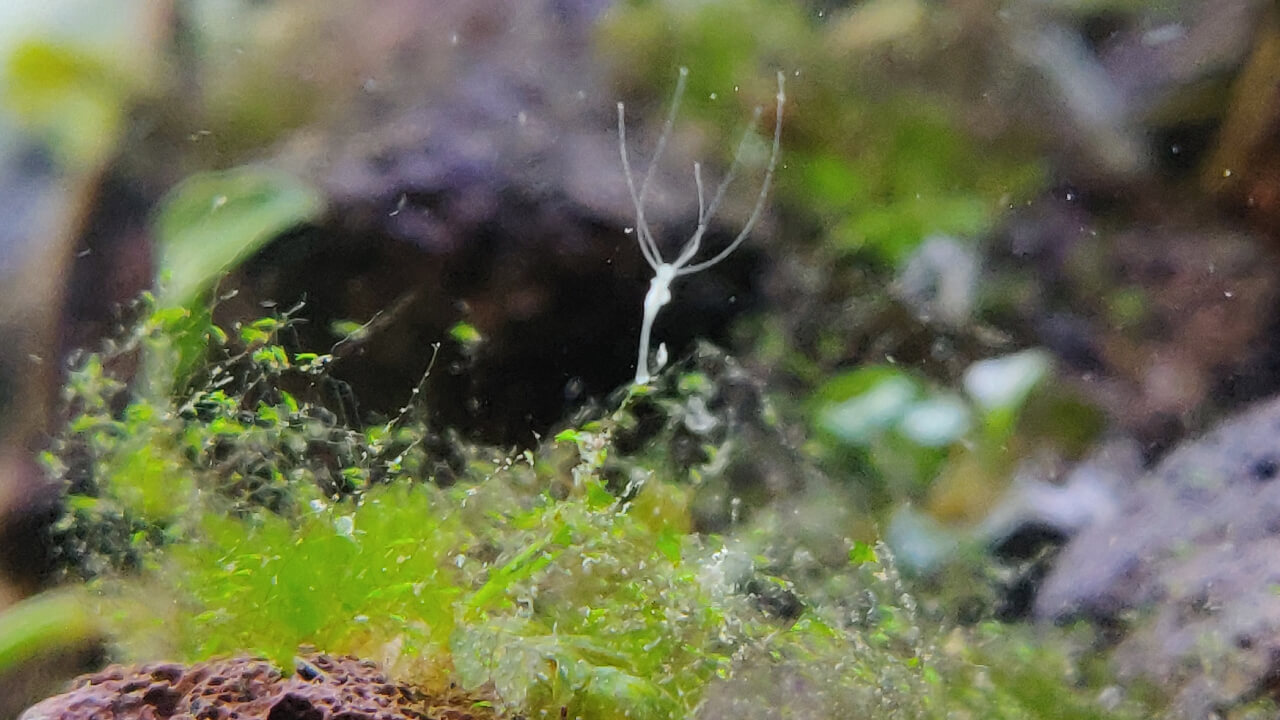 If you've got a lot of tanks, it can be helpful to get multiple copies of your equipment.

Sharing a net between all your tanks could accidentally spread hydra from one tank to the others.

This may seem a bit overkill, but it's much easier to prevent hydra than get rid of it.

How to get rid of hydra in your shrimp tank

You've got a few different routes to getting hydra out of your shrimp tanks.

Manually removing the hydra is the safest way, but can also be incredibly slow and quite annoying.

If you don't get the full hydra body out, and only get half, they'll just grow back again in a few days.

You can use a syringe and some airline tubing to pull out the hydra. Trying to get a good seal around the hydra can be difficult when they're on rough hardscape.

You want to get them all onto an aquarium wall, but how?

One day, I turned up my air pump's power to increase the water flow from my sponge filter. I wanted my bee pollen pellets to spread further in the tank.

I'd seen one or two hydras in there, but not many, so thought it was manageable. The next day I had dozens of hydra on the glass wall opposite my filter.

If you want to try and herd your hydra into a single spot, I'd suggest you repeat what I did:

As hydra eat by using their tentacles to push food in their mouth, they'll find the most food where there's a lot of water flow.

Instead of being spread around the tank, they'll group up on the opposite wall of your filter, enjoying the tiny pieces of food floating around.

Cut back on powdered foods too, so they have to climb onto the wall to find enough food.

Once you've got them all hungry and in one place, start vacuuming them out. 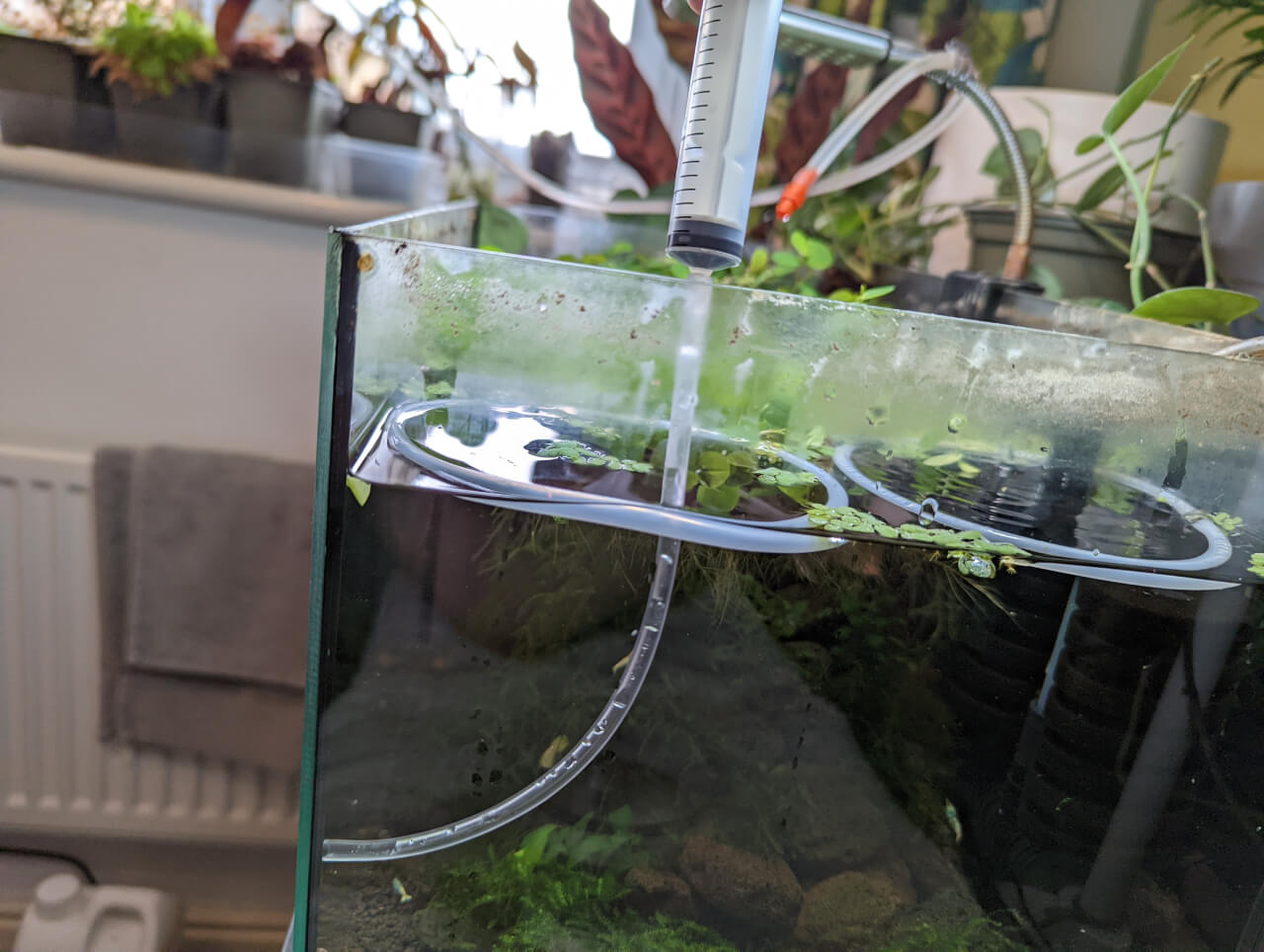 The built-up negative pressure in the tube should quickly pull the hydra off of the glass in one piece.

You can then squirt the hydra water into a jug to dispose of later.

Keep doing this every day, until you manage to get rid of all visible hydra.

This is the method I used to get rid of all hydra in my Blue Bolt shrimp tank. It took me about 10 minutes of vacuuming over 3 days to clear them out.

A faster and more effective way to get rid of hydra is by using medication in the water.

A few popular shrimp-safe choices of chemical treatments are:

Beware that chemical treatments will probably hit your snail population.

I personally lost all my Malaysian Trumpet snails after dosing fenbendazole.

Even for months afterwards, Ramshorn snails would also die shortly after being put into the water.

Eventually, after about a year, the water was safe enough again for snails to survive.

Be very careful when working out what dosage to use in your tank. Remember that hardscape, like rocks and wood, will displace water.

Your tank might hold 40L when it's empty, but your rocks and substrate might take up 10L of space.

If you dosed for 40L of water, instead of the correct 30L, you'd be overdosing by about 30%. This could cause a lot of problems, including for your shrimp.

Some aquatic snails will eat hydra, like Spixi snails, for example.

Don't expect them to hunt them down in a rush, but they should make a good dent in the population.

Some small fish can be kept with shrimp too. Neon Tetras are one example, but there's always going to be a risk of your shrimp being eaten too.

Don't add fish to your tank purely to eat the hydra. But, if you were thinking about trying to add some fish, this might be a bonus for you.

Hydras are unwelcome pests in shrimp tanks. They can attack and eat baby shrimp, reducing your colony.

You can manually remove them or buy medication to kill them, but this will also probably be lethal to snails.

Avoid having to deal with hydras by making sure you prepare new hardscape materials by cleaning them thoroughly.